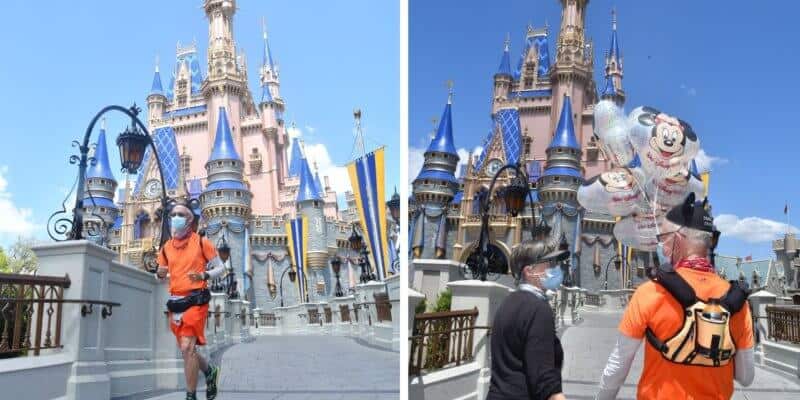 If you are a fan of runDisney, we have the most epic Disney marathon story to tell you!

We have been tracking the story of Don Muchow, a marathon runner who chose to run across the country from Disneyland to Disney World to raise awareness and money for Type 1 diabetes.

Don Muchow began his run in 2020, but due to COVID-19 and the ongoing pandemic, he had to take a few pauses on his journey across the country. Well, once he arrived in Disney World, Cast Members were waiting to give him a magical greeting for his fantastic accomplishment of running across the country. Disney Parks Blog stated:

As Don finally reached Magic Kingdom Park, Disney cast members applauded and cheered. The 59-year-old said it was “surreal” to finish and he celebrated at Walt Disney World Resort by enjoying a popular Mickey Mouse ice cream bar and a ride on his favorite attraction – “it’s a small world!”

Don specifically said that once he arrived in Disney World, he wanted to go to Magic Kingdom and ride “it’s a small world”, and it is fantastic to see that Cast Members not only ensured that goal was met but gave him the entrance he deserved filled with applause.

Now that Don has reached Orlando, he is officially the first person to have ever run from Disneyland to Disney World —  quite an impressive feat for the 59-year-old who has been giving himself insulin shots daily! Don accomplished what seemed to be the impossible by running miles a day, eating 4000 calories a day to fuel himself, and sleeping about 7 hours each night. He ran from sunrise to sunset — including when it rains.

It was great to see that once he arrived at The Most Magical Place on Earth, both Don and his wife, who has been following Don as he ran in a van, were able to enjoy Disney World after over a year of trying to complete this run, even in the most difficult of circumstances during this pandemic.

Let’s also not forget that it was not just Don and his wife that traveled the country, but plush mascot, Coco, as well!

Don ran with a mascot that Disney helped to create! Coco, the diabetic monkey, is a plush toy with a miniature insulin pump, blood sugar monitor, and emergency alert bracelet. Disney even has a branded website dedicated to the cause and provides books about Coco to newly diagnosed kids to help them learn about all the things they can do despite Type 1 diabetes.

Would you ever try to run from Disney World to Disneyland?