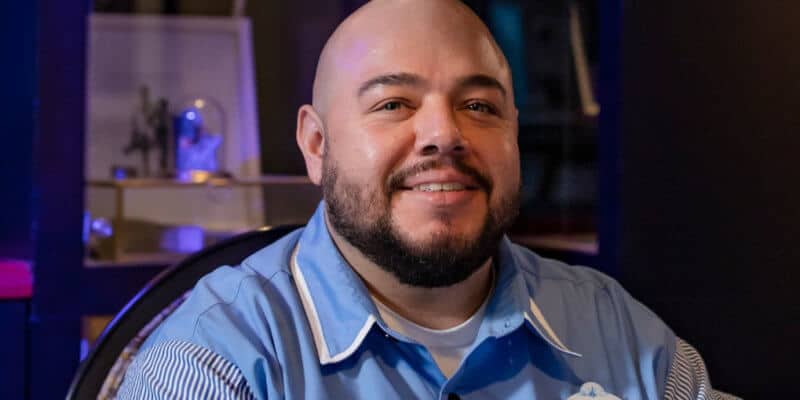 Disneyland Cast Member Mark Gautier was given another chance at life — and was ultimately saved — when he and his girlfriend decided to make trips to Disneyland a part of their exercise routine.

“I was diagnosed with diabetes back in 2013,” said Gautier. “I went into a diabetic shock. I was in a coma for a few weeks.”

His health journey hasn’t been an easy one. When he woke up from his coma over six years ago, he realized he had lost all ability to write and draw, which devastated him because all his life he has been an artist. From then on, realizing the impact his condition had on him, Gautier made it his mission to become healthier.

“Doctors told me that I needed to start walking again, so my wife and I got passes to Disneyland,” he shared. He and his wife began coming to the parks several times a month, and they fell in love with everything the parks had to offer.

But as the couple went to the parks more frequently, they found that Gautier began losing more and more weight, improving himself physically just as the doctor ordered. Inevitably, Gautier would walk several miles a day whenever he visited the parks, and even though (like many Disney fans) he didn’t shy away from indulging in delicious treats like corn dogs and turkey legs, he was also able to lose 150 pounds in the process.

In an interview with the OC Register, Gautier shared that even though he and his wife would try all the delicious snacks Disneyland and Disney California Adventure have to offer, they would always share everything they ordered, control their portions, and never stop walking. At the Happiest Place on Earth, there is always something new to look at or a lesser-known area to explore, and with something beautiful around every corner, Disneyland Resort kept them on their toes — literally.

On top of improving his physical health, the frequent trips to Walt’s original Magic Kingdom led to another goal: working for The Walt Disney Company.

“And a few weeks after coming to Disneyland, I just said, ‘I want to work here.’ It was the ambiance, the artwork, the details that Disney provides,” said Gautier. “I just wanted to get into the company, and I eventually did. It was another chance for me. I was already given a chance at another life, and once Disney Aspire came about, there’s another chance.”

Now, Gautier has enrolled in the Disney Aspire program. He is majoring in graphic design with the goal of obtaining his bachelor’s degree from Bellevue University. But by day, he’s a Disneyland Hotel Cast Member and makes magic for guests every chance he gets.

“The biggest change that I’ve seen in Mark is his attitude towards life,” said Gautier’s wife, Vanessa. She said, “He has overcome so many obstacles in life.”

“I have never had the support system that I have with my wife,” Gautier concludes in the video interview with Disney Parks, which you can watch below. “Just to see my daughter, it just makes me not want to ever give up. I just want her to be able to look up to me, and to be that role model for her, to inspire her that she can go out and do anything in this world.”