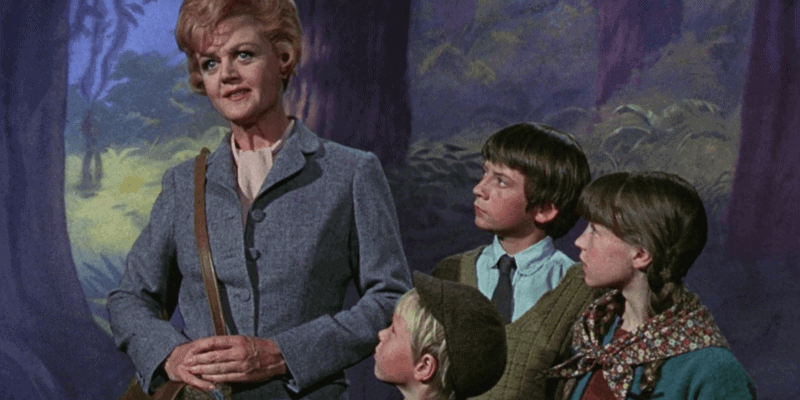 The cult classic film, Bedknobs and Broomsticks (1971) is coming to the stage.

The musical fantasy film produced by Walt Disney Productions saw Dame Angela Lansbury’s apprentice witch – the iconic Miss Eglantine Price — take the evacuated Rawlins children, Charlie (Ian Weighill), Carrie (Cindy O’Callaghan) and Paul (Roy Snart), under her care during World War II. Originally put on hold due to its likeness to the then shelved Julie Andrews-led Mary Poppins (1964), the film was eventually released, going on to establish a cult following across the globe.

The colorful movie, which took viewers from the streets of London to the animated Isle of Naboombu, played with Disney’s crossover of live-action and animation and went on to receive five Academy Award nominations, winning Best Special Visual Effects.

If you have ever seen Bedknobs and Broomsticks, you have probably once or twice (maybe seven times…) attempted to fly your own bed to a magical fantasy island run by a lion king – no, not Simba – King Leonidas, the ruler of Naboombu. If you have ever imagined yourself under the wardship of an apprentice witch, pretended to fly your bed to far-off places, then your dream could become a reality.

A new musical is set to debut in the UK, with it’s world premiere at Newcastle upon Tyne’s Theatre Royal which will see the music The Sherman Brothers made famous – such as “Substitutiary Locomotion” and “The Age of Not Believing” – as well as new music from Shakespeare in Love stage composer Neil Bartram.

The Bedknobs and Broomsticks musical is currently issuing an open casting call for two of its principle roles – children Carrie and Paul Rawlins.

There has been a plunging chandelier in The Phantom of the Opera, a levitating lift in Charlie and the Chocolate Factory and now, Bedknobs and Broomsticks will make everyone’s favorite furniture fly.

Per What’s On Stage, the casting call is as follows:

Casting director Jo Hawes has put a casting call out for the two child roles in the upcoming musical tour of Bedknobs and Broomsticks.

Hawes has asked that those interested must be London commutable (within a 45-mile radius) and be available for a six-month contract plus rehearsal time. All diversities are welcome, with those applying must be “strong singers and sensitive actors”.

She is looking for two roles – that of Paul (the youngest of the three children) who can be a maximum of 4’6″ as well as that of Carrie, described as being “on the cusp of growing up”. Anyone interested in playing Carrie must be a maximum of 4’8″

No other casting has been announced yet, but if the popularity of the classic Disney film is anything to go by, it is certain to be the next smash hit stage production. The announcement came after the president of Disney Theatrical Productions, Thomas Schumacher, confirmed it was in development following the closure of Frozen on Broadway. Candice Edmunds and Jamie Harrison will direct and Brian Hill is writing the book.

What is Bedknobs and Broomsticks about?

An apprentice witch, three kids and a cynical magician conman search for the missing component to a magic spell to be used in the defense of Britain in World War II.

Could you be the next BIG star of this iconic cult classic, Bedknobs and Broomsticks? Let us know your thoughts on the film and stage production below.