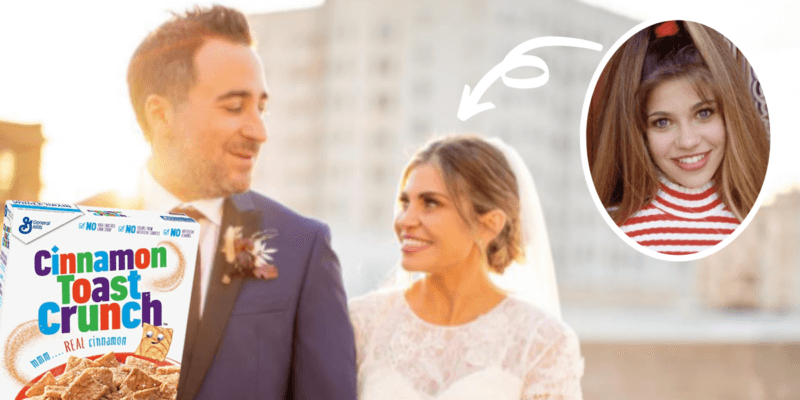 If you had “sugar-covered seafood found in popular cereal by the husband of a Disney Channel star” on your 2021 bingo card, well then, you were 12-steps ahead of everyone else.

Even the man in question agrees, as he posted:

I have learned that my wife and I were not on your Bingo cards.

I have learned that my wife and I were not on your Bingo cards.

Karp immediately reached out to the company and took to Twitter to share his interesting tale (pun absolutely intended).  When Cinnamon Toast Crunch responded with what they thought the shrimp tails actually were, things quickly went down from there.

After further investigation with our team that closely examined the image, it appears to be an accumulation of the cinnamon sugar that sometimes can occur when ingredients aren’t thoroughly blended. We assure you that there’s no possibility of cross contamination with shrimp.

Karp responded that there was no way the apparent shrimp tails were simply clumps of cinnamon and sugar.  He also downright refused to accept another box of the cereal that the company said that they would send him.

While finding what appears to be shrimp tails in your breakfast cereal would undoubtedly be very disconcerting, the saga unfortunately didn’t end there.  Karp went back through both bags of cereal in the box and found more than he was bargaining for.

On top of the alleged shrimp tails, of which more were found, he found black lumps baked into the squares — and, quite shockingly, pieces of what appeared to be string or even dental floss.

Fans and followers were quickly on the case and shared exactly who or what they thought was responsible for the additions to the Cinnamon Toast Crunch. Dave Perrillo shared a graphic of Cap’n Crunch with the caption:

I think I know who the culprit was, clearly a case of corporate sabotage.

I think I know who the culprit was, clearly a case of corporate sabotage. pic.twitter.com/JkIPEnWhmg

Throughout the day, Karp kept his followers updated and Tweeted responses that he received from Cinnamon Toast Crunch. He later let everyone know that he was, in fact, taking the cereal and tails to a local laboratory to be tested to confirm exactly what they are.

For their part, Cinnamon Toast Crunch tweeted the following:

While we are still investigating this matter, we can say with confidence that this did not occur at our facility. We are waiting for the consumer to send us the package to investigate further. Any consumers who notice their cereal box or bag has been tampered with, such as the clear tape that was found in this case, should contact us at 1-800-328-1144.

Related: Hilary Duff Spills on How 30-Year-Old Lizzie Would Be Today

While she mainly stayed out of the fray, Danielle Fishel-Karp did Tweet about the saga a couple of times, simply saying; “I usually wait until after lunch to eat shrimp”, while retweeting one of her husband’s original pictures.  She was also as shocked as everyone else at the Cinnamon Toast Crunch response of “sugar accumulation”.

"Accumulation of sugar particles." I am truly at a loss for words. https://t.co/TtIyEYplNe

Later that night, Karp let his followers know that the items in question were being sent to a lab to have an official DNA test done to find out exactly what they are.  He followed up that tweet with another one saying that the National History Museum of Los Angeles will be paying for the test.

They also are paying for this to be done, which is helpful when a corporation is telling the internet I actually found wads of sugar. So basically, my shrimp got a scholarship.

There is currently no official answer as to what exactly Karp found in his cereal, but we will let you know as soon as we find out!

The article has been updated since its original publication.

Have you ever found something suspicious in a box of packaged food?