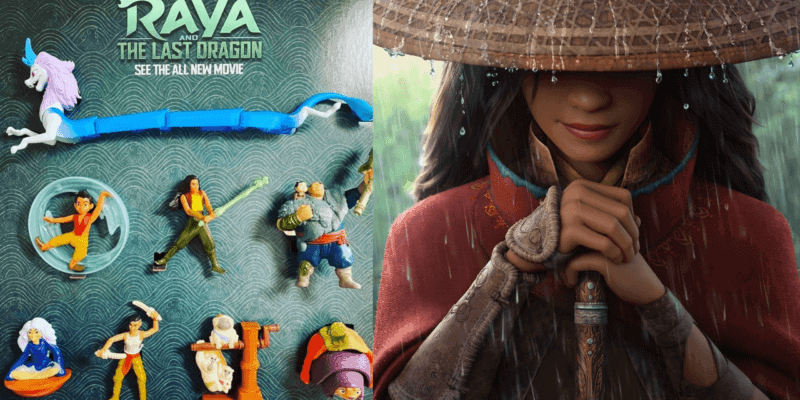 Those of you that have been lucky enough to watch Raya and the Last Dragon already will know that Disney has another hit on their hands. It feels very different from the last few Disney movies we’ve seen — and that’s not a bad thing! The long-standing partnership that Disney has had with McDonald’s is looking to continue with a new range of Raya Happy Meal toys.

The new range of kid’s meal toys includes eight figures featuring characters from the recent movie. Take a look at the Raya and the Last Dragon Happy Meal toys below:

We won’t spoil any of the plot points that occur in the movie, but here’s a list of characters that you will find in the new range of Disney Happy Meal toys:

McDonald’s Happy Meal toys have long been a staple for Disney fans, becoming huge collectibles for many fans who have quite the Happy Meal toy collection. There’s no doubt that there are going to be a lot of people looking to get the complete set here.

We saw huge interest for the Disney Parks Happy Meal toys that were released to celebrate Mickey and Minnie’s Runaway Railway — but were later pulled before the entire set could be released. Disney animated movies tend to do really well for McDonald’s as well!

A reminder that Raya and the Last Dragon is out now both in theaters and on Disney+ Premier Access.

Will you be heading to McDonald’s to grab these new Happy Meal Toys? Let us know in the comments below!