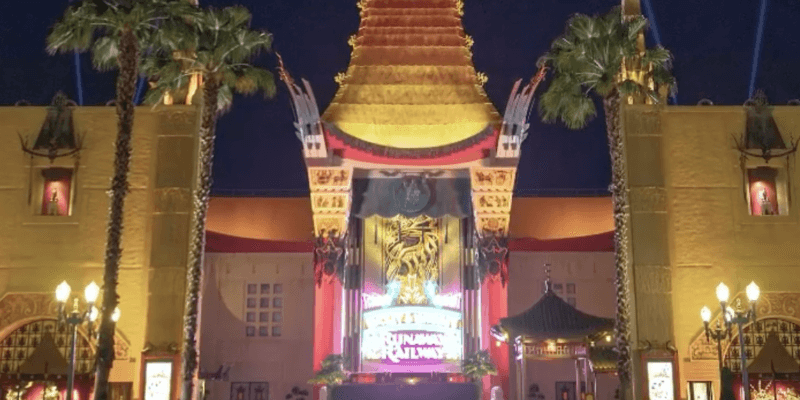 As we approach the 50th-anniversary celebrations at the Walt Disney World Resort, one of the most exciting things has been watching parts of the transformation happen in front of our eyes.

Up until now, it seemed that Magic Kingdom had the most visible transformations available for Guests to see with all of the decorations going up on Cinderella Castle, but recently Disney’s Hollywood Studios surprised us with a lighting package many did not expect.

When news of the 50th-anniversary celebration dropped, Disney provided concept art that each park would adhere to for the celebration’s theme. At Hollywood Studios, we sat that The Twilight Zone Tower of Terror would be getting some sparkle, but we did not see any news about the Chinese Theater, another huge centerpiece, and landmark within the Disney theme park.

Then, Walt Disney Imagineer Zach Riddley showcased that an all-new lighting package would gleam from the Chinese Theater, home to Mickey and Minnie’s Runaway Railway. You can read more about that announcement here.

Now, Walt Disney Imagineering (@waltdisneyimagineering) has also posted on Instagram, but this time we are getting a behind-the-scenes look at how the new lighting works, and what it is meant to represent.

Show lighting designer Josh Iscovich let us take a look at the finishing touches that were being put on the Chinese Theater, and spoke about the importance of how lighting can allow Guests to feel different emotions. With this new lighting package, Disney is creating a red carpet Hollywood premiere effect every night.

Now, Guests will be able to look up in the sky when they are at Hollywood Studios and instantly know where the center of the park is, plus, it will allow them to feel that there is something grand going on — allowing Guests to instantly be transported to the movies.

After seeing this, it will be exciting to know how Disney plans to shine up a hotel that has remained abandoned for years. Now, we will just need to wait and see what Disney’s Animal Kingdom is up to in terms of prepping the park for the celebration!

Do you think the new lighting on the Chinese Theater is too subtle? Or is it the perfect amount?

If you want to plan a 50th anniversary Disney vacation, you can start planning now! Click here to join Mickey Mouse and Minnie Mouse at a Hollywood premiere of your own before you board their new attraction at Disney’s Hollywood Studios.