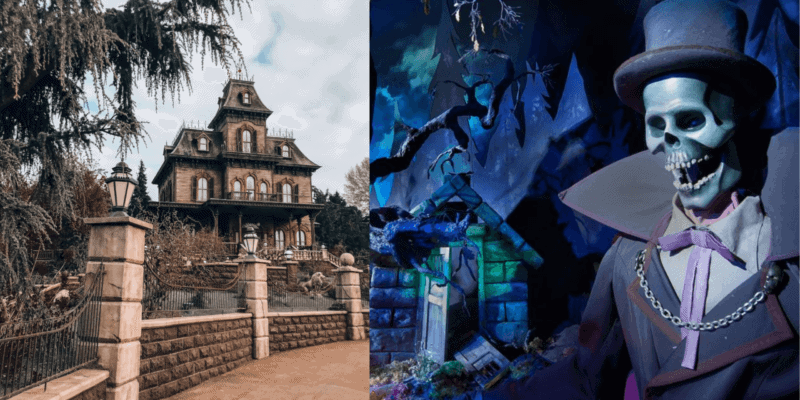 When people think of spooky rides at a Disney Park, often the response is either The Haunted Manion at Disneyland or Walt Disney World or The Tower of Terror. Both are excellent choices but Phantom Manor is a woefully underappreciated attraction at Disneyland Paris that is seeing a bit of love from the Disney team in their latest #DisneyMagicMoments post.

The latest attraction video takes you on a virtual tour of one of the best attractions at Disneyland Paris and includes all the spooky sights and sounds that regular visitors to the park will encounter. Check out the full ride-through below:

The story of the attraction is vastly different from other iterations thank largely to the fact that the attraction sits in Frontierland in Disneyland Park:

Henry Ravenswood was a Western settler who struck gold in Big Thunder Mountain and founded the Big Thunder Mining Company. Using his newly discovered fortune, he created Thunder Mesa (Frontierland) and built himself a Victorian Manor to overlook the mountain where he lived with his wife Martha.

His daughter, Melanie Ravenswood became drawn to several suitors who all planned to take her away from Thunder Mesa (much to the dismay of her father).  One by one, the suitors began meeting various cruel fates. Several questionable deaths later and Melanie is engaged to a train engineer when an earthquake occurs, killing her mother and father.

On the big day, a Phantom (the spirit of Henry)  appears to seek vengeance on Jake and kills him. After waiting hours for her future husband to turn up, all the guests leave the manor and poor Melanie is left in her wedding dress, convinced that Jake will return. Melanie begins wandering the house and singing melancholy songs of lost love.

Years have passed, the house has decayed and to this day, Henry still haunts the Manor with his demonic friends and nobody knows if the singing coming from an alive or dead Melanie Ravenswood.

If you enjoyed this #DisneyMagicMoment then why not check out some of our other favorites:

Currently, Disneyland Paris remains closed with no set reopening date. It is great to see these ride through videos to keep fans excited about the park during the closure!

Are you a fan of Phantom Manor at Disneyland Paris? Let us know in the comments below!

We can help you book the perfect vacation to ride Phantom Manor at Disneyland Paris when it reopens, click here for more information!