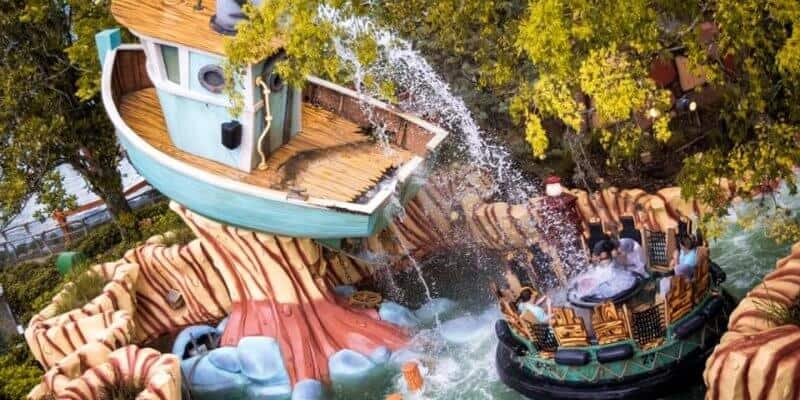 Back in November 2020, Universal announced that five of their major attractions were going to undergo refurbishment. One of those was super-soaker water attraction Popeye & Bluto’s Bilge Rat Barges — but it seems that more than just the attraction may be receiving some sprucing up.

It is quite normal for any water attraction to close down for the winter months, no matter what the theme park. In the instance of Universal, both Popeye & Bluto’s Bilge Rat Barges, and Dudley Do-Right’s Ripsaw Falls were set to close for refurbishment. That being said, it looks like Universal has had to close the entire section that houses Popeye & Bluto’s Bilge Rat Barges in Toon Lagoon!

Related: There Is A New Way Park Hop at Universal Orlando

TheUnofficialGuides (@TheUGseries) showed a photo of Popeye & Bluto’s Bilge Rat Barges on Twitter, but it looks like the entire section of Popeye’s Island is closed off to Guests for the time being. Typically, guests would be able to eat at the Popeye-themed quick-service location, Wimpy’s, and explore Popeye the sailor’s boat. However, it looks like none of that will be available until the refurbishment walls come down.

Universal has not stated if the refurbishment for Popeye & Bluto’s Bilge Rat Barges will consist of more than just routine maintenance. Even with the entire section closed off, it may be nothing more than standard winter refurbishment. Because of how expansive the attraction is, Universal may need to use the entire space to perform maintenance checks. Or, perhaps Universal would rather close off the section since construction is not really too appealing for Guests to look at when visiting a theme park.

Plus, Popeye’s boat connects directly with the attraction, so it makes sense for the boat to be closed when the ride is. The attraction is set to reopen on February 19, 2021, and likely, the rest of the Popeye section! However, Universal has not confirmed specifically when the rest of the area will reopen to the public.

If you want to take a trip to Universal’s Islands of Adventure, you should start planning your vacation today! From the Wizarding World of Harry Potter, to amazing thrill attractions, Universal has something for everyone. Click here to get started today.

Do you think Toon Lagoon needs to be revamped at Universal Orlando Resort? Let us know your thoughts below!