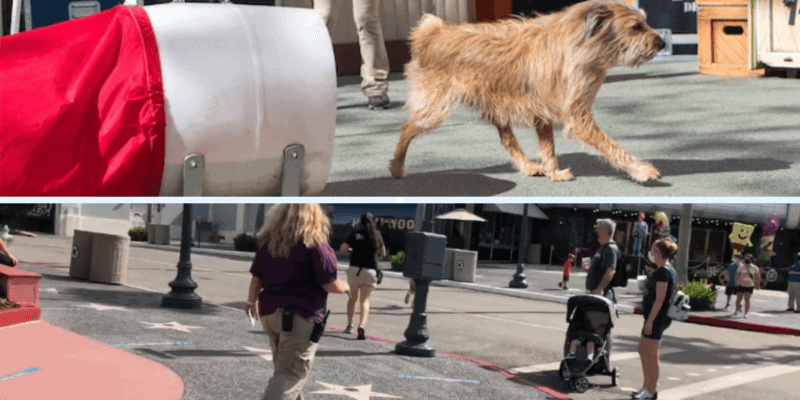 Who let the dogs out you ask? Nobody — the dog let himself out!

Today at Universal Studios Orlando theme park, a four-legged performer from the Animal Actors show let himself out to enjoy a day at the park.

Thanks to a video posted on Twitter by The Unofficial Guides, we can see trainers from the show attempting to catch this runaway in front of the Horror Makeup Show, which means this little guy went a good distance after his escape!

An escapee from the Animal Actors show made it all the way to Horror Makeup before being corralled by trainers. @UniversalORL ^@skubersky pic.twitter.com/Q9JjaaCF0O

We hope that this pup enjoyed their day out on the town, and hope that they were able to be put back into the safe care of the trainers.

We love the Animal Actors show at Universal. If you have not watched the show we really encourage you to on your next visit as it is full of fun and personality.

Here is the official description of Animal Actors on Location at Universal Orlando:

Hollywood’s favorite feature creatures are ready for their close-ups in a show that’s paws-itively wild. Here’s your chance to see some of the most talented animal actors perform in a hilarious mix of video segments, live skits and audience interactions.

Featuring a menagerie of vibrant birds, mischievous pups, agile cats and more, this special showcase is a hoot for the whole family.

The show puts the spotlight on many different kinds of animals including pigs, cats, dogs, and even exotic birds! Because the show is entirely done live, you never know how the animals might behave, so every time you watch the show it is different from the last.

Have you seen the Animal Actors show at Universal Orlando? Let us know in the comments!

We can help you plan a perfect vacation to Universal Orlando Resort, click here!