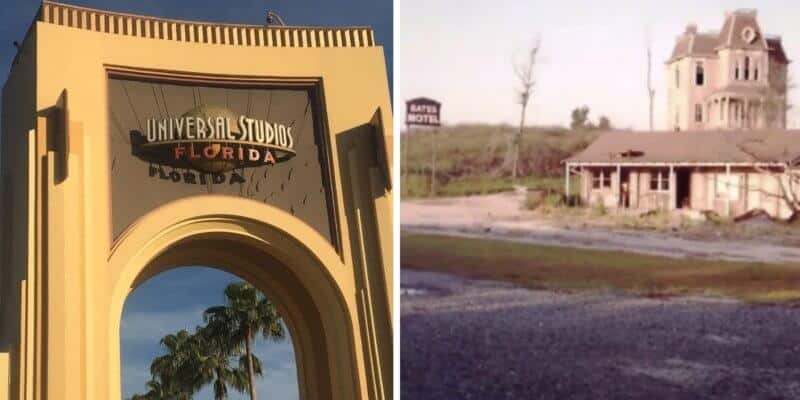 Whether you are a fan of classic suspense filmmaker, Alfred Hitchcock, you love a good Halloween movie, or you’re an annual visitor to the Halloween Horror Nights house at Universal Orlando Resort, then you surely know of the film Psycho. Hitchcock’s Psycho has been paving the way for both horror films as well as boys with mommy issues since 1960.

That being said, Universal Orlando has also had their hand in the Psycho franchise, filming a sequel on their property just as the theme park debuted. Psycho 4: The Beginning was Universal Studios Florida’s first full-length feature film production starring Anthony Perkins, Olivia Hussey, and Henry Thomas. The film was ready to enter production in 1988, but Universal ended up putting a pause so that it would film in 1990, as the park opened to Guests.

Hitchcok, who died in 1980, was, of course, not involved in this production.

Before the theme park opened, Psycho 4 filmed indoor scenes at Sound Stage 21 using original props and staging from the first Psycho film. The exciting thing about this production, however, was that it had to recreate Bates Motel and the classic Psycho home — and used the original 1960’s blueprints to ensure both were identical. Plus, Anthony Perkins reprised his role as Norman Bates in the film, so it truly felt like the original set.

Guests heading on E.T. Adventure and Back to the Future: The Ride were able to see the home as it was exposed atop a grassy hill. Director Mick Garris stated that the production was “as much as a theme park attraction as [it was] a movie production,” due to the influx of Guests who would watch the production film during park hours.

After the film was complete, the set remained intact as a photo-op and a relic of the film’s cinematic history. It then was used for Halloween Horror Nights shows and a Psycho-themed house. But, over time, the large plot of land was not being used and Universal decided to begin demolishing the set. The sets were supposed to be moved to another area in the park, but that never happened.

The first to go was Bates Motel to make way for, ironically, the now-closed children’s show A Day in the Park with Barney. Then, in 1998 Curious George Goes to Town made a pit stop at the Psycho house, destroying it (much like Marion Crane in the shower scene) so that the new children’s play area could be constructed.

If you want a deeper detailed view of the history of the Psycho 4 house and Bates Motel set, check out the video below by YouTuber Storybook Amusement!

Do you wish you had the chance to see a movie filming live while at Universal Studios Orlando Resort?