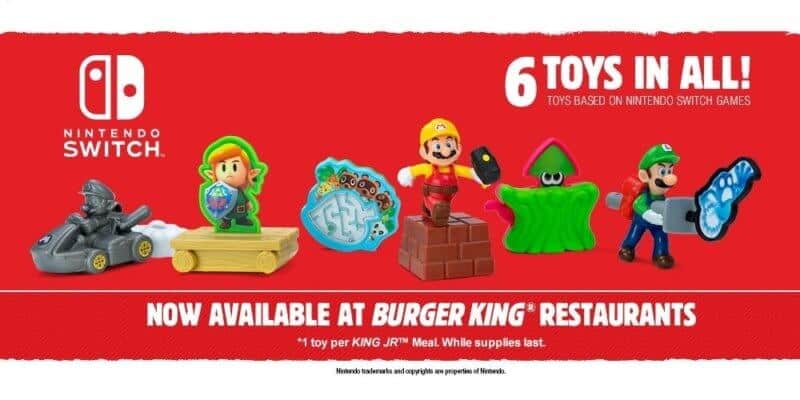 According to a report by comicbook.com Nintendo has teamed up with Burger King to bring toys to their King Jr. Meals. Additionally, fans can buy a “Super Mario Meal” which enters them into the chance to win a Nintendo Switch! This promotion is, of course, in promotion of Nintendo’s brand new Mario game Super Mario 3D + Bowser’s Fury which goes on sale February 12.

Nintendo and Burger King will be running this promotion from now until March 15, so you have plenty of time to get your toy! However, we have seen these kinds of toys sell out fast and pickings can become scarce — so if you want to gather the toys as a collector I would head to BK sooner rather than later. The Nintendo franchises that will be featured at Burger King will be Super Mario Maker, Animal Crossing: New Horizons,  The Legend of Zelda: Link’s Awakening, Luigi’s Mansion 3, and more.

Comicbook.com went on to detail that what Nick Chaves the Senior Vice President of Sales and Marketing from Nintendo of America had to say about the collaboration with Burger King:

“Nintendo has always had a mission of delivering smiles to families, and we’re delighted to work with Burger King to deliver smiles through our partnership together…Whether families are ringing Mario’s Super Bell power-up or they simply want to ring the dinner bell in style, we hope everyone can look forward to some king-sized Nintendo fun at Burger King.”

Should we try getting the Nintendo toys from the Burger King at CityWalk at Universal Orlando Resort? I think I just might!

Will you be getting the Nintendo toys from Burger King? Let us know in the comments!