Get a Guy Fieri Burger Delivered From Universal Hollywood! - Inside the Magic 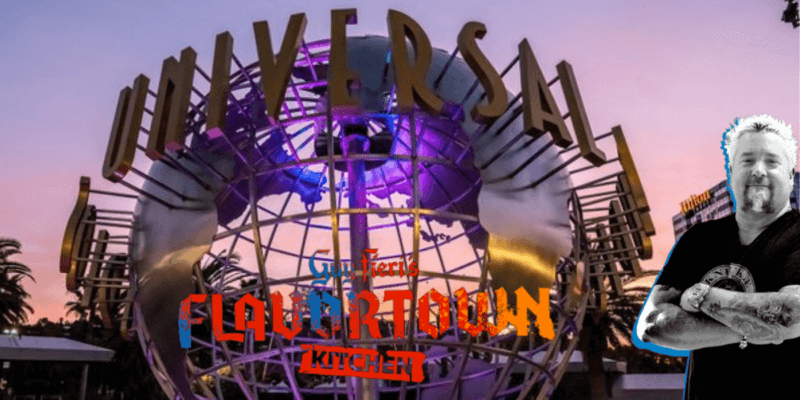 Whether you want to take a trip to Flavortown or you want a bit of Universal Studios magic, it looks like Guy Fieri has got you covered.

Guy Fieri has recently launched a delivery-only restaurant called Flavortown Kitchen, which will deliver some of the chef’s most famous foods.

Yes, you read that right. According to the official website for Guy Fieri’s Flavortown Kitchen, you can get authentic Guy Fieri food delivered to your Los Angeles home from Universal Studios Hollywood — specifically, from a ghost kitchen with a Universal CityWalk address. Check out one of the Ghost Kitchen addresses below:

Flavortown Kitchen is a delivery only restaurant featuring real-deal flavors from Chef Guy Fieri. From our signature Bourbon Brown Sugar BBQ Wings to our award winning Mac N Cheese Burger, all of Flavortown’s favorites come straight to your door step.

Guy Fieri and theme parks seem to go hand in hand these days. The chef, TV personality, and restaurateur has his own quick-service dining location at Disney Springs, the shopping, dining, and entertainment district at Walt Disney World Resort in Orlando, Florida. Considering how wildly popular Chicken Guy! is at Disney World, we aren’t surprised to see Universal CityWalk Hollywood — the shopping, dining, and entertainment district of Universal Studios Hollywood in Los Angeles — as one of the ghost kitchen locations.

Plus, you can even order a Chicken Guy! classic chicken sandwich. If you’ve tried this meal at Disney World, then being able to order it in California will likely transport you back to the magic.

If you live in Southern California or the Los Angeles Area, you can visit the official website for Guy Fieri’s Flavortown Kitchen to view the complete menu and place an order.

Remember that although the Flavortown Kitchen is operating one ghost kitchen out of Universal CityWalk Hollywood, it is delivery only — not an actual table-service or quick-service restaurant. However, CityWalk Hollywood is currently open for shopping and dining, so you can visit the official website to plan a visit. The adjacent theme park, Universal Studios Hollywood, is still closed due to state restrictions amid the ongoing pandemic, although there have been some whispers regarding a partial reopening — stay tuned for more information.

What do you think of Guy Fieri’s Flavortown Kitchen? Let us know in the comments!

Comments Off on Get a Guy Fieri Burger Delivered From Universal Hollywood!