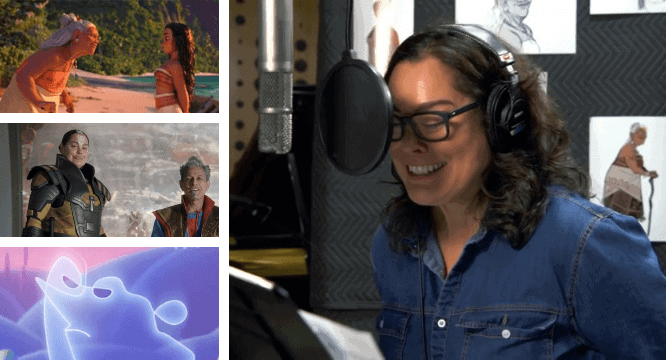 Do you know who’s behind your favorite Disney animated characters? You may know who the Disney Princesses are and can even name all of John Ratzenberger’s Pixar cameos, but it may surprise you to hear how three Disney characters thread together.  Gramma Tala (of Moana), Terry (of the new hit movie Soul), and Topaz (of Thor: Ragnarok) are all voiced by the same unassuming actress: Rachel House. House masterfully alters her voice to suit the animated (and real-life) characters in a way that is not only enchanting but perfectly camouflaged.

House’s soothing alto voice is “dark like tinted glass”, to quote the band, Cake. Born on October 20, 1971, she naturally has an Australian regional accent, as she is a New Zealander with parents from Scotland. House also directs and serves as an acting coach, with over 50 credits on her film resume. Her work with Disney and Pixar is notable, as fans often seek out a star’s work or enjoy the deep cuts of animation inside a Hollywood star’s portfolio.

“It’s Terrytime!” Terry is the suspicious, rigid, and all too-enjoyable accountant in “The Before” from Soul. Unlike all the other “Jerry” mentors, Terry is unique and impactful to the introspective movie premise. Terry’s voice, however, has a thick down-under accent that suits him/her perfectly, and the glowing lines that make up their abstract outline are charming. It wasn’t until a Disney fan made the connection between Gramma Tala and Terry that we looked up Rachel House and were enchanted with her work.

Here is a great clip from Soul featuring a few of Terry’s moments and a thrilling peek of their voice. I will warn you that it CONTAINS POSSIBLE SPOILERS, so if you would like to enjoy Soul on your own accord, please skip the clip.  Rachel House’s voicing of Terry is dark and smooth and felt soothing to many fans watching Soul as it debuted on Disney plus.

Having enjoyed Soul so much, fans took to looking up House’s other work with Disney. They, of course, came up with her masterful work in Moana as Gramma Tala. The deep, aging Polynesian voice is trusting, challenging, and introspective as we listen to Gramma’s stories and advice. Below is a clip of her seaside moment with Moana.

Disney pulled Rachel House aside to speak on voicing Gramma Tala in Moana as well as to hear her thoughts on Moana as a brave, strong, Polynesian lead. Flicks Clips on YouTube carries the interview from 2016, as many Disney fans have now been visiting the clip after having watched Soul:

“I play Tala, who is Moana’s grandmother. She is wise but she is quite stubborn and she holds lots of secrets because she was told to. Somewhere along the line, she lost her courage to explore… to keep pushing… With age, she started losing her courage. I think Moana loves her Grandmother and is very accepting of her difference. They are similar people and they both recoginize that. They have adventurous and couragous qualities.”

House as Topaz in Thor: Ragnarok

Lastly, House lent not only her voice but her personage to the Marvel Studios film, Thor: Ragnarok. You can see her aside Grandmaster on the planet Sakaar. A balance to Grandmaster’s vivacious and elaborate demeanor, Topaz is strong and (mostly) silent, as well as obedient to a fault.

Marvel Entertainment released an extended clip for Grandmaster and Topaz, which is silly, animated, and a great insight into each of their characters. It’s worth the quick watch for a giggle courtesy of these two.

Rachel House’s portfolio with Disney continues to expand between her Moana, Soul, Thor and even The Lion Guard work. We hope that she lends her talents to more upcoming films so we can enjoy her diverse voice and enjoyable presentations.

Which of Rachel House’s films is your favorite? Leave us a comment below!