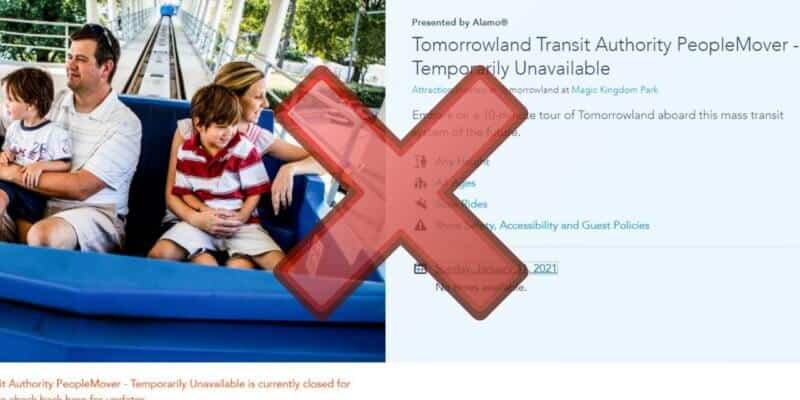 The Tomorrowland Transit Authority PeopleMover has been under refurbishment for almost 11 months now, and it looks like that timeline could be stretched to a full year.

The PeopleMover, located in Tomorrowland at Magic Kingdom, closed for refurbishment even before Walt Disney World’s temporary closure (which, of course, was due to the on-going pandemic) back in March. Once Disney World reopened in July, Guests were saddened to see that the Tomorrowland Transit Authority PeopleMover in Tomorrowland was not going to be moving any people for the foreseeable future.

It appeared as though the PeopleMover was on schedule to reopen on January 10, 2021, as it was no longer listed on the refurbishment calendar for that day, however, now the Disney World website has been updated and is now showing yet another extension of the PeopleMover’s possible reopening date — this time hopefully January 31st.

As you can see noted below, on January 30th, the Tomorrowland Transit Authority PeopleMover is still closed for refurbishment.

However, the following day, January 31, the attraction is no longer listed on the refurbishment calendar.

That being said, Tomorrowland Transit Authority PeopleMover fans shouldn’t start a countdown just yet. On the attractions official webpage, the PeopleMover does not show that it will reopen on January 31st, and just shows the ride as “Temporarily Unavailable”, as it has ever since last summer. That does not mean the attraction will not reopen as scheduled, but it seems that things are not certain as of yet.

The attraction has had many extensions in regards to when it will reopen, and after being pushed from November to December, then December to January, and now January to the end of the month — it seems Disney is still unsure of when exactly the PeopleMover will be able to once again move the people around Tomorrowland.

However, there is a positive note for fans who cannot wait to kick back on the TTA and relax on a busy Magic Kingdom day once more. Recently, the PeopleMover was seen undergoing a possible form of testing. Cast Members were pushing the ride vehicles down the tracks during park hours, and although we have yet to know what this means, it is clear that Disney is tirelessly working on bringing the attraction back for Guest enjoyment!

Follow along with Inside the Magic as we continue to report on all things PeopleMover. If you want to book a Disney vacation so you can hop back on this attraction once it opens up, you should start planning the magic today. Click here and get started.

Do you think the PeopleMover will actually open on January 31st? Or do you expect another delay? Let us know your thoughts!

Comments Off on When Will PeopleMover Open? Attraction Closure Extended Again