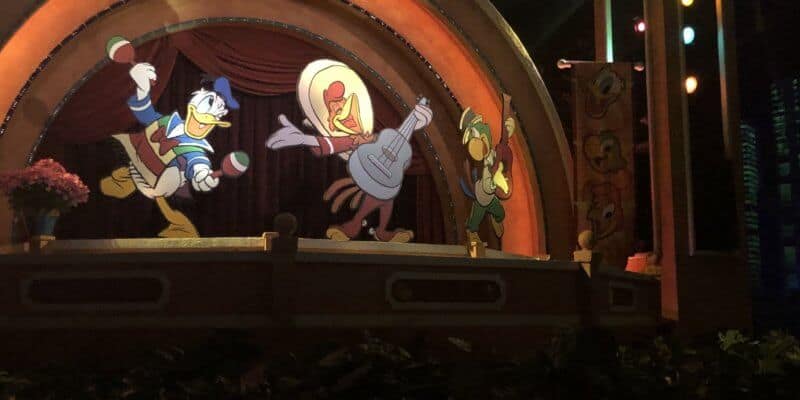 Have you ever closely listened to the “Three Caballeros” lyrics, which can be heard on EPCOT’s Gran Fiesta Tour? One verse sings, “No matter where he goes, the one, two, and three goes, we’re always together.”

Those lyrics have never been more accurate.

24 days after Donald Duck went missing on Gran Fiesta Tour, his two band members, Panchito, the Mexican charro rooster, and José Carioca, the Brazilian parrot, are now also missing, as well. The evolution of the missing animatronics on the Mexico pavilion attraction has been long-standing at this point but began with a toppled over Donald Duck.

After Donald Duck was bent over for a full day on January 4, 2021, Disney removed his animatronic from the attraction and replaced it with a tree and Donald’s sombrero (which you can see in the image below, right side). A few days after that, the tree (which many have joked acted as a memorial site for Donald Duck) was removed, and it was only Jose and Panchito holding down the fort. You can see this reflected in the image below on the left:

Considering Donald was gone for nearly a month days before Disney took further action likely means that there could be more serious problems with the animatronic than originally anticipated. The Gran Fiesta Tour in EPCOT’s Mexico pavilion has had animatronics go haywire in the past, but not for this length of time.

Now, Disney has removed both of its other animatronics, as well — the animatronic Three Caballeros (Donald, Jose, and Panchito) are now missing from the attraction, and the grand finale showcases cut-outs of the three birds. Take a look:

On one hand, at least all three birds have returned, but on the other, these thin cut-outs do not compare to the fun fluffy animatronics that typically bring the attraction to a big finish. Personally, I am a huge fan of the Gran Fiesta Tour, and the finale scene is my favorite aspect of the (otherwise dated) attraction. To remove all of the Three Caballeros animatronics does leave the attraction feeling quite lackluster, at least for the time being.

We have previously shared the fan theory that the attraction could be reimagined to fit a Coco theme, and now that Disney has chosen to go in a direction of removing these three animatronics (at least for the time being) that theory is sounding even more plausible. Of course, Disney could be repairing the birds and nothing has been said about the attraction shutting down for good, so this is all purely speculation based on the circumstances.

Disney has not yet released any details regarding the animatronics of Gran Fiesta Tour, and the attraction is still operating at the Mexico pavilion for Guests. Though the attraction is often a walk-on, Guests often face quite a long line to get into the Mexico pavilion, either for dining, margaritas, or the Gran Fiesta Tour. It appeared today that boatloads of Guests couldn’t wait to see the most recent misadventure of the Three Caballeros.

Stay tuned to Inside the Magic as we continue to track what is going on with our favorite Disney birds!

Do you think EPCOT is going to replace Gran Fiesta Tour with a Coco ride? Have you experienced this attraction recently?