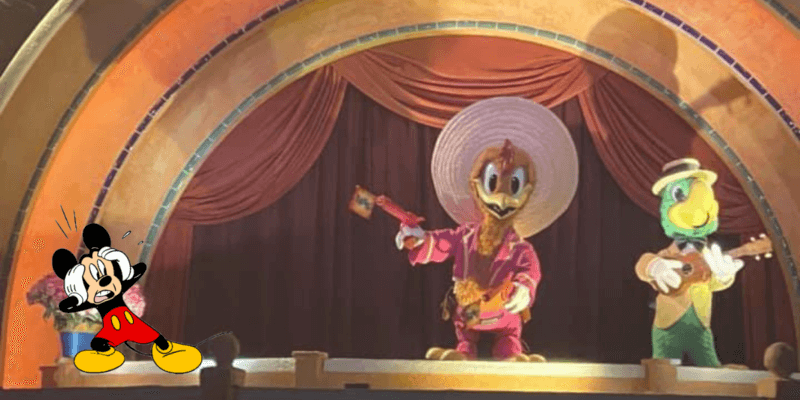 The Gran Fiesta Tour boat ride at EPCOT’s Mexico Pavilion is still missing one of its Three Caballeros, Donaldo Duck, but now all trace of the animatronic has been removed from the finale concert stage.

Recently, we shared the news of how Donald was missing from the grand finale concert scene, leaving Panchito and Jose Carioca with Donald’s sombrero left on a plant. After Disney fans on the internet had their fun with the sight making jokes like “RIP Donald,” and likening the plant/hat combination to a tombstone, it appears that Disney Cast Members have removed the sombrero and plant now too.

Check out this video provided by one of our reporters on-scene in EPCOT today:

Here is a before and after picture for reference. The before the picture was provided by Instagram user Jenny Flake (@disneyhungry):

Now, this is not the first time the Three Caballeros have taken the state without one of their own. Last year we reported that the Jose Carioca animatronic took a fall mid-performance and was himself missing for quite some time.

Donald’s continued disappearance still fits well with the storyline of the “it’s a small world”-esque attraction and it is most likely our mischievous duck is out in the crowd dancing with some senoritas.

Disney describes the attractions as the following:

Subscribe to our newsletter below to be updated on when Donald reappears in the attraction, as well as all the latest news surrounding the Disney World Resort.

What do you think about Donald Duck being removed from the attraction? Let us know in the comments!

We can help you plan the perfect magical Disney vacation, click here for more information!