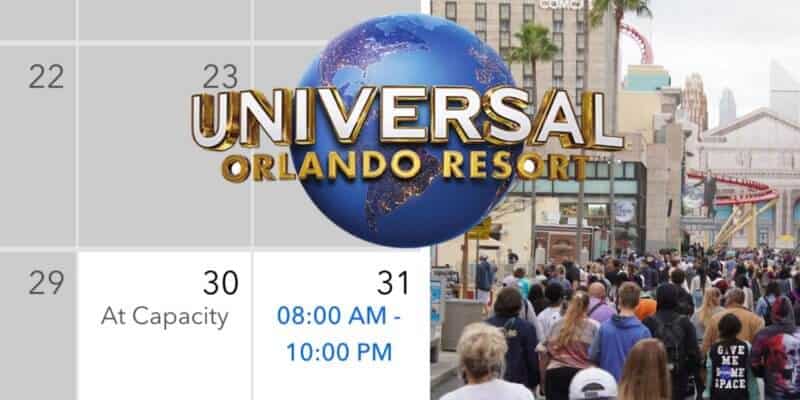 If you have been following along with Inside the Magic’s coverage on Universal Orlando’s capacity during the pandemic, you likely know that the parks hit capacity, and lately, are doing it much more often. Now, it seems Universal is attempting to do something that, in a pandemic free world, would have sounded crazy from a business point of view. Universal Orlando is now asking their guests to make other park plans if they are flexible.

We expect our theme parks will reach capacity very early in the day on Wednesday, December 30th. If your plans are flexible, please consider visiting another day. Before your visit, check our social channels or call the capacity hotline at 407-817-8317 for real-time updates.

We expect our theme parks will reach capacity very early in the day on Wednesday, December 30th. If your plans are flexible, please consider visiting another day. Before your visit, check our social channels or call the capacity hotline at 407-817-8317 for real-time updates. pic.twitter.com/UY30heup6x

Clearly, Universal’s capacity limit (35%) is much smaller than the guest’s demand to enter the park. Earlier in the day (and before this Tweet), Universal Orlando had hit capacity within the first hour of opening, which is likely why the theme park began looking to the following day with a warning. Although guests can check the capacity status via the Universal Orlando app or the capacity hotline (407-817-8317), not all do, especially tourists who may not know to do so. Therefore, arriving at either Universal Studios or Universal’s Islands of Adventure an hour after it opens, intending to have a fun day at the parks, and then being turned away due to capacity could definitely lead to guests’ disappointment.

As we can see from bioreconstruct’s Tweet (@bioreconstruct), the early morning crowds are quite strong, which is why capacity is being reached so quickly.

It seems that Universal is attempting to mitigate that disappointment by asking those who can re-arrange their park days to do so. In the case of Universal’s Tweet, now that we know the future, it was a good call on Universal’s end to try and deter guests as the theme parks lot was full 30 minutes before the parks even opened this morning. With New Year’s Eve around the corner, guests should expect that these heavy morning crowds will likely last through the end of the week.

Asking guests to rearrange their plans in terms of visiting Universal Orlando is not something new for the company, as they have also sent out requests to Annual Passholders asking them to try and come on weekdays and avoid weekends when possible. This notice does not really apply during the holiday season as every day has been busy. Still, before that, weekends would consistently hit capacity — and will likely continue to do so after the holidays with tourism picking up in Orlando.

Remember to check Twitter, the Universal Orlando app, and the capacity hotline before you visit the theme parks over the next few days if you want to avoid waiting in a queue to enter the park as other guests leave.

Do you think Universal will keep hitting capacity this quickly after the holidays?