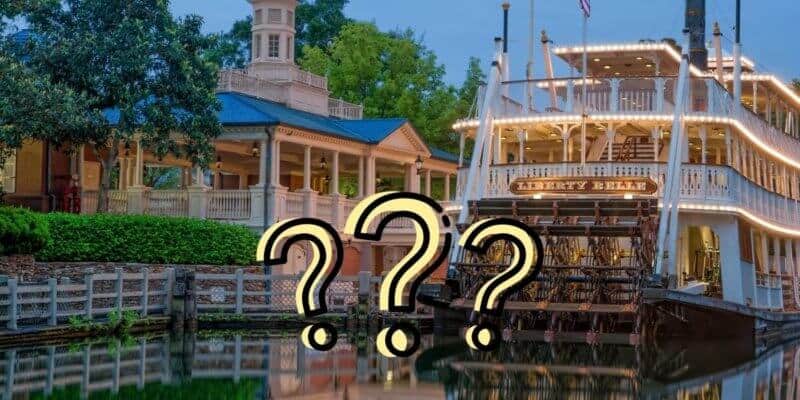 Both the Liberty Square Riverboat and Tom Sawyer Island began a lengthy refurbishment in 2020, and many were wondering if this was just for general maintenance or if we would see major changes in this area of Magic Kingdom at Walt Disney World Resort. Within a few weeks, the Rivers of America in Liberty Square was completely drained and Guests immediately started wondering what Disney Imagineers were doing.

Disney World has not made any immediate statements regarding the refurbishments of these attractions. In fact, right now the Disney World website states the following:

As of the time of publication, both the  Liberty Square Riverboat (also known as the Liberty Belle) and Tom Sawyer Island are not listed on the Disney Parks calendar come March 1, 2021, so we anticipate both of these attractions to reopen come springtime. However, refurbishments are always subject to change and Inside the Magic will continue to update you once we get information regarding these Magic Kingdom attractions.

But, when these attractions reopen to Guests, will we see major changes?

Honestly, I would say most likely not. Disney Imagineers probably drained the river in order to work on the track of Liberty Square Riverboat to help make it run smoother and to ensure everything is working properly — minor but necessary routine maintenance.

The Liberty Belle itself is also having work done off-site. The steam-powered paddleboat was lifted out of the water with movable rails and is stored in the Magic Kingdom area service marina, which allows Imagineers to make improvements on the boat itself if needed.

Aerial view of Liberty Belle in refurbishment. Located in the Magic Kingdom area service marina, northeast of the park. Note the movable rails, and the riverboat can also be serviced inside the structure. pic.twitter.com/3OVbPXmwGu

Additionally, we are unsure if any work has actually been done on Tom Sawyer Island. The main reason this attraction closed with Liberty Square Riverboat is that Disney Imagineers drained Rivers of America and there is currently no way to get to the island without using watercraft transportation.

Recently, though, Disney filed a permit for this area of Magic Kingdom. This could be for anything from a new paint job, new flooring, or anything else minor that could help enhance Guests’ experiences once the attraction reopens, but at this time, we are unsure what work has been done. More than likely, the changes that will occur in this area of the park will be minor, and Guests should expect to have the same magical experience on Tom Sawyer Island once it reopens, if this happens to be an area of the theme park that you often visit during your Disney vacation.

Inside the Magic will continue to update you as we get information regarding Liberty Belle Riverboat and Tom Sawyer Island.

Are you excited for when these two Magic Kingdom attractions reopen? Let us know in the comments below.

If you want to book a trip to Disney World for 2021, get in touch with our friends at Academy Travel, who will be with you every step of the way. Get your free quote today.

Comments Off on When These Two WDW Attractions Reopen, What Will Change?