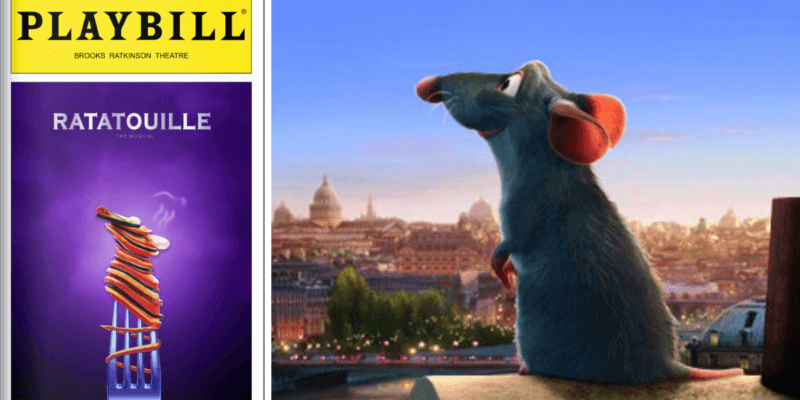 Ratatouille: The Musical now has its very own playbill!

Playbill posted the official unofficial playbill artwork this morning on their Instagram.

But Playbill went farther than the front cover. In fact, they published the entire playbill! Song list included! Check it out:

The development of Disney’s latest (fake) musical originates on TikTok.

Playbill traces the trend to “Daniel Mertzlufft (@danieljmertzlufft on TikTok), who was the mind behind TikTok’s Grocery Store: The Musical. The New York-based composer and arranger was tagged in a video by his friend, Rocky Paterra (@rockysroad, of “I’m An Accountant” TikTok fame). The video was Em Jaccs’ (@e_jaccs) “Ode to Remy,” a love ballad for Ratatouille’s lead character that was posted in August. Paterra asked Mertzlufft, “Is this the next Grocery Store?” Yes, yes it was.”

Here is the first bit that started it all:

“This is Alan Menken, through and through,” says Mertzlufft. “It’s all of his Disney act two finales with the big orchestra: the French horn, the strings, the bells. It’s [The Little Mermaid]’s ‘Part of Your World’ finale. It’s Beauty and the Beast. The last four bars are 100% a nod to Hunchback with the big bells and big chorus. There’s some Bobby Lopez and Kristen Anderson-Lopez with their Frozen finale.”

But Mertzlufft is not the only one at work on this project. TikTok users across the platform have devoted their time and talents towards getting #RatatouilleTheMusical trending. The trend has also been a way for many in the now-shuttered musical theater business to continue to exercise and showcase their talents.

“There’s an actual plot to draw from [with Ratatouille], and everyone loves that movie,” says Mertzlufft. “There are so many songwriters on the platform, and we’re all longing to write. Writers are the only ones who can actively be working on something at the moment. But everyone is out of work, like stage crew, costume designers, directors. ”

While Disney has not announced any plans to actually make Ratatouille: The Musical, it did jump on the bandwagon adding its own Hamilton–style contribution with Disney Channel Original Movie Zombies star Milo Manheim from inside EPCOT’s upcoming attraction Remy’s Ratatouille Adventure. Click the link below to watch for yourself:

Here are some clips of the songs that Playbill has included in the show:

Song Clips for Ratatouille: The Musical

♬ Trash is Our Treasure – Gabbi

Tango for Collette and Linguini by TikTok user @blakeyrouse

“Anyone Can Cook” by TikTok user @rjthecomposer

♬ Anyone Can Cook – RJ Christian

But more than just a fun gig, TikTok creators are submitting choreography and costume ideas! Even Broadway stars are getting involved! Playbill reports Dear Evan Hansen alum Andrew Barth Feldman has been “cast” as Linguini and Tony nominee Kevin Chamberlin as Gusteau.

If Disney did change its mind, this would be the first Disney show on the Great White Way based on a Pixar film. We at Inside the Magic will be sure to update its readers if any word from Disney comes to light.

What do you think about TikTok’s Ratatouille: The Musical? Let us know in the comments!