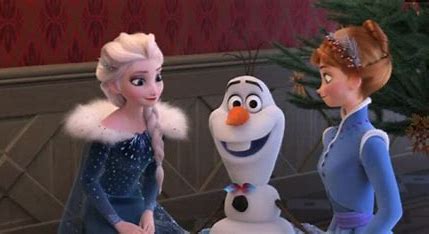 If you’re a Disney fan–especially a fan of Frozen 2—and you’ve spent any part of your Christmas Eve or Christmas Day on Twitter, chances are you’ve seen a post from the parody accounts of Forky from Pixar’s Toy Story 4‘s and Disney Plus‘s Forky Asks a Question Forky to Frozen‘s Olaf.

But the best part of the tweet isn’t necessarily what Forky says to Olaf, but rather what Olaf is doing in the post. Let’s just say Olaf proves in the video that he does indeed have mad dance skills, just in case anyone was wondering. Forky has retweeted Olaf’s original tweet with the comment: “Olaf did not have to snap on us like that. . . ”

You haven’t seen it yet? Check it out here, and be sure you’ve got your volume turned up.

olaf did not have to snap on us like that… https://t.co/HTRUTSfcnd

The dance moves were actually created by a TikTok user and have taken TikTok by storm. The music in this version is a compilation of “All I Want For Christmas is You” by Mariah Carey and “Crank That” by Soulja Boy. If you have teenagers living under your roof at home, you may have seen these dance moves before. But somehow, Olaf dancing–and especially when it involves moves from a popular TikTok video craze–is just epic. Who doesn’t love Olaf?!

Forky’s Twitter (@ForkyToyStory) isn’t an official Twitter account managed by The Walt Disney Company or Pixar. In fact, the account details describe Forky’s Twitter as a “parody account,” but we can appreciate the humor behind this post, as well as Olaf’s willingness to be a part of something so popular on social media. Just another reason to love Olaf!

What do you think about Olaf’s dance moves? Let us know in the comments section below.