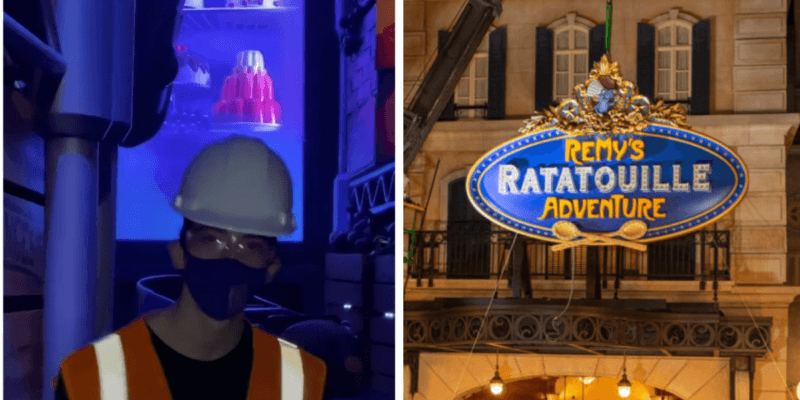 Cast Members have taken eager Disney fans inside Remy’s Ratatouille Adventure in the most unconventional way: a TikTok video.

We can see what appears to be the pantry of Gusteau’s restaurant and we can see that the props, from the shelves themselves to the wheels of cheese, are blown up to makes us feel like the size of a rat. We can also see an open fridge.

Ratatouille: The Musical has been trending across TikTok where users have been giving their own answer to the question “What would a Ratatouille Musical look like?” If you want to participate, simply upload your own video to TikTok with “#ratatouillemusical.” Click here for some inspiration and backstory on the trend.

This video all about Remy follows last night’s news from D23 where Imagineer Tom Fitzgerald and Pixar’s Roger Gould and Harley Jessup gave fans more details about what they can expect. Specifically that we will be transported from EPCOT’s “real world” Paris and into Remy’s Paris.

Related: How EPCOT’s ‘Ratatouille’ Attraction Will Differ From Disneyland Paris

But while the creatives discussed the attraction, attention was kept to the exterior. Now, this fun TikTok video takes us inside and we can get a glimpse of how much progress really has been made.

Remy’s Ratatouille Adventure is set to make its debut at EPCOT’s France Pavilion in World Showcase in 2021, but no official opening date has been announced. We at Inside the Magic will update our readers as more information on that opening day comes to light.

Does the news about Remy’s Ratatouille Adventure make you want to start planning your next trip back to the Walt Disney World Resort? If so, our friends at Academy Travel are standing by to help you make this next visit as magical as possible. Click here to get started and to receive your free, no-obligation quote today!

Excited about this new attraction? Let us know in the comments!