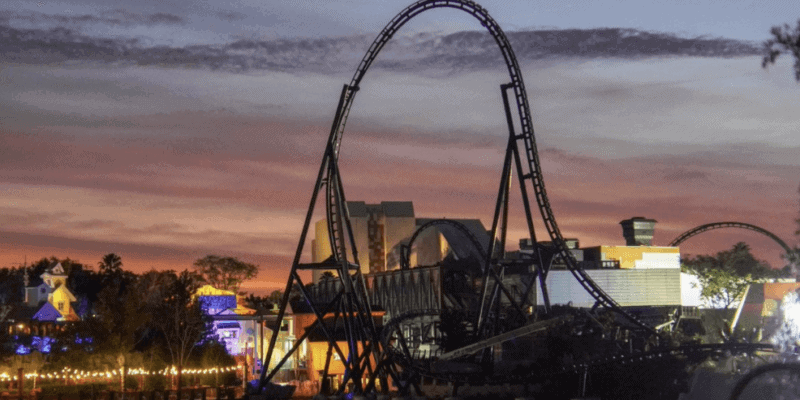 Now, it seems that human fans aren’t the only ones who can’t wait to get up-close and personal with the exciting new thrill ride. As per photos from Twitter user Bioreconstruct, an osprey nest has appeared at the apex of the roller coaster.

The account shared several images, beginning with this one on Thanksgiving Day, November 26. The caption reads:

An Osprey continues to build the next nest at top of Jurassic World VelociCoaster. pic.twitter.com/qER6DJdLAf

And, finally, an artistic shot captioned:

Moonrise over the distant but highest track of Jurassic World VelociCoaster

Mere moments before publication, Bioreconstruct shared a new image of the osprey carrying a new branch to his nest, flying over a completely different area of Universal Orlando:

Osprey in flight with a branch, over the roof line of Marvel Super Hero Island

Osprey in flight with a branch, over the roof line of Marvel Super Hero Island. pic.twitter.com/DLc9V2UP5b

Although this may seem like a strange phenomenon, the osprey nests atop the new Florida theme park coaster have caused quite the buzz on social media.

There is even a newly released “Osprey on VelociCoaster” t-shirt and sweatshirt line. Bioreconstruct shared this post from How Bowers:

With the blessing of (and insistence by) @bioreconstruct, I am proud to present this design inspired by his amazing photography of the ospreys that build nests at the top of the #Velocicoaster tracks at #JurassicPark in #IslandsofAdventure.

There's now an Osprey on roller coaster shirt! How has a lot of great designs for sale too. https://t.co/pJhcL69ZMg

Universal has described the Jurassic Park franchise-inspired VelociCoaster as the ultimate adventure in which:

We know Universal fans can’t wait to ride this thrilling coaster, hopefully sooner rather than later!