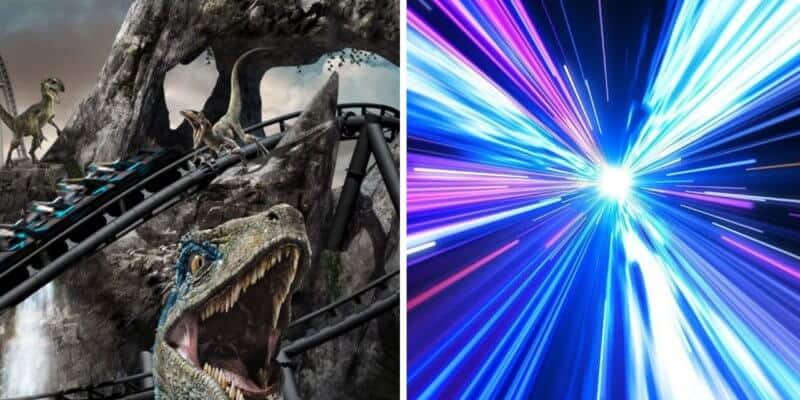 If there are two words I never thought I would use in a sentence, “VelociCoaster” and “disco” would be at the top of my list, until I saw the launch tunnel for the new coaster.

Universal’s newest roller coaster, VelociCoaster, is set to debut summer 2021, and thrill fans can barely contain their excitement! With gravity defying drops and multiple high speed launches, this is set to be Universal’s most ambitious coaster yet — and they made Hagrid’s Motorbike Adventure. VelociCoaster welcomes the Jurassic World IP into Universal’s Islands of Adventure theme park, and as we can see in the attraction’s teaser trailer, the rides inspired storyline of blasting off on a raptor run, comes directly from the films.

And, speaking of that high speed launch, we now have an inside glimpse of what looks to be the loading building, and the lighting is looking insane! Thanks to Alicia Stella (@AliciaStella) and Bioreconstruct (@bioreconstruct) on Twitter, we are able to catch a glimpse of the illuminating lights that riders will see when they board the VelociCoaster.

As we can see below, the lighting is a multitude of colors, which will give riders a bright and disco-like experience when they ride the coaster. The lighting in combination with the speed, could create a cool light speed effect, where riders are almost blinded into this new prehistoric world.

Those lights will illuminate the trains so people in the queue can see the launch through those windows there. https://t.co/BbJPI4C5zQ pic.twitter.com/GHvWd2jzy1

Directly under the lights, we can also see that there is a whole row of windows, in which future riders can watch the take off as they wait in the queue. The idea to allow riders to see the attraction take off will only heighten the rider experience and excitement, and also makes it necessary to have lights illuminate the ride vehicle.

It also will heighten the immersion for riders of this attraction. Since you are entering a raptor encounter, having other guests watch you through large windows mimics a zoo like experience, where you are inside with the animals (or in this case, dinosaurs). With atmosphere and ride noises blasting from within the ride vehicle, mixed with the intricate and expansive rock work, Universal is creating their more immersively thrilling coaster yet.

Do you think the launch lighting on VelociCoaster is a good touch?