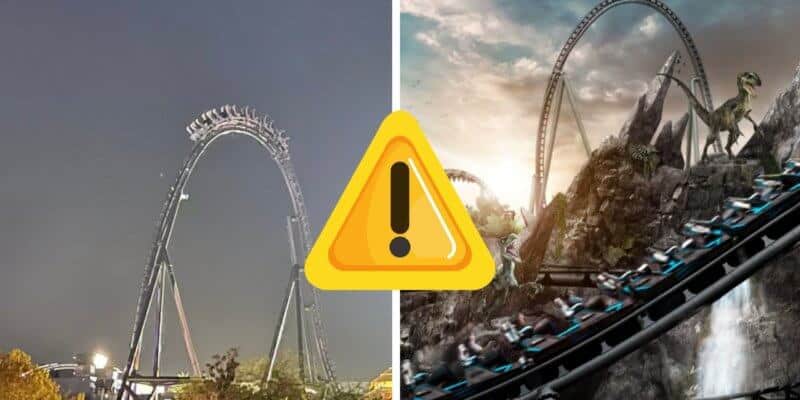 Universal’s VelociCoaster has been undergoing some major testing lately, and it seems like the ride is having some technical difficulties.

The VelociCoaster is the most anticipated attraction to hit Universal Orlando Resort in Summer 2021. Pulling from the Jurassic World IP, the coaster is set to bring you into the films during a terrifying raptor run. If you have been following along Inside the Magic’s reporting on the coaster, you know that it has gone from slow pull-through testing to full-on ride throughs. The coaster is going to give us multiple launches, spirals, gravity defying moments, and a giant drop that looms over Islands of Adventure before you even arrive to the attraction.

Well, if you weren’t scared of the attraction before you may find yourself a little more shaky after you watch this video of the VelociCoaster stopping at the highest drop.

Midway Mayham (@Midway_Mayham) posted this video of the attraction unable to move forward once it hits the top hat of the attraction, meaning that gravity defying, stomach churning drop. Many riders may want to get through that portion of the coaster as quickly as possible and not experience any scares, so to know this is happening now is both good and bad. Good, because if there is a kink, it is being fixed before human testing — and bad, because there may be a kink.

If you want a more clear shot of the coaster stuck at it’s highest point, here is a nightmare inducing photo from Elvey (@elvenage).

But did the ride really break down?

We do not know exactly what the answer to this question is, but Bioreconstruct (@bioreconstruct) made a good point. As you can see below he states. “It’s likely that VelociCoaster is doing long duration block tests now. Can the train stop and hold indefinitely. Then continue.”

The idea of the coaster trouble shooting any possible malfunction seems very true and plausible considering it is still in it’s testing phase. However, there is still a chance this was not a purposeful choice and indeed an accident.

Might be good to RT this. It's likely that VelociCoaster is doing long duration block tests now. Can the train stop and hold indefinitely. Then continue. https://t.co/nMalI5KTov

Stay tuned to ITM for everything VelociCoaster!

Do you plan on riding the VelociCoaster?