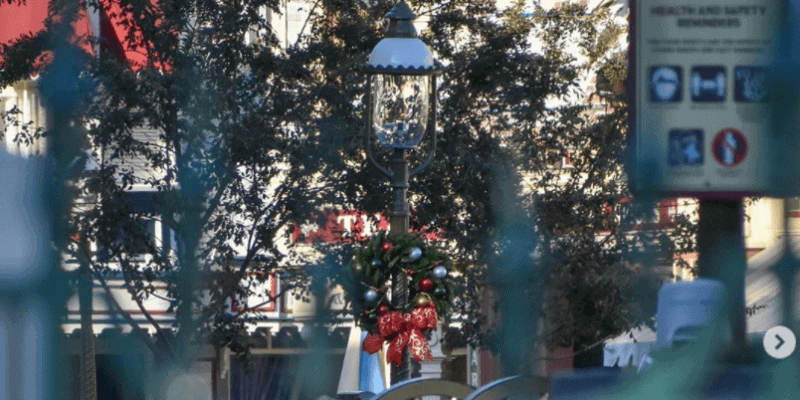 What could this mean for the future of Disneyland? Will it open for the holidays? Let’s dive into all the details and talk about it.

Disneyland announced earlier this week that it would in fact be reopening Buena Vista Street inside Disney’s California Adventure Park. This was a surprise and delight to fans who have been waiting for Disneyland to reopen for over half a year.

Today, we saw decorations go up at Buena Vista Street in preparation for its reopening, which will only include shopping and dining. You can see photos and read the details here.

BUT in a (peppermint) twist of fate, Disneyland has decorated Main Street, U.S.A today as well! Here is a look from Disneyland Guest @foodatdisneyland who caught this picture and posted to Instagram saying,

Had to post this even though we just posted…It is a wreath on Main Street in Disneyland! What could this mean?!?!?

Had to post this even though we just posted…It is a wreath on Main Street in Disneyland! What could this mean?!?!? ???

What does this mean, indeed! With the overwhelming response to the reopening of Buena Vista Street, and the DVC rooms being made available for members to book this holiday season, perhaps it is possible that Disneyland Resort realized the demand for the resort area will be so high that it would be a good idea to reopen Disneyland’s Main Street as well. Reopening Main Street, U.S.A. for shopping and dining may help with crowd distribution throughout Buena Vista Street and Downtown Disney.

Unfortunately, Guests who are not a part of the Disney Vacation Club program will not be able to book a room at a Disneyland Resort hotel in 2020. But that has not stopped fans from being excited about phased reopening, we are sure that when Buena Vista Street opens it will be a busy day at the Disneyland Resort.

Also, it appeared that filming for the ABC Disney Christmas Parks Special has taken place at Walt Disney World in Florida. While Disney has not confirmed this, a large temporary stage was built in front of Cinderella Castle and then taken down promptly after what we assume was filming that took place there.  It is possible that the decorations could only be temporary in order for a segment to be filmed for the ABC special. Again, these are just our own thoughts.

All of this is only our own speculation, so we’ll be keeping a lookout for any more news from Disney officials regarding this development. So far, all we know is that officially, Buena Vista Street will be reopening at Disney California Adventure on November 19 as an extension of Downtown Disney.

The DVC rooms that became available to book for members are almost fully booked all the way through next summer! Fans of Disneyland are clearly excited to be back at their favorite place. And we are too!

Currently, you can enjoy Downtown Disney District for shopping and dining! So if you would like to experience Disney now instead of waiting for Buena Vista Street to reopen, or news on Disneyland head to Downtown Disney! Currently, holiday treats and merchandise are being offered around Downtown Disney, and a visit is sure to put you in the Christmas spirit!

Hopefully, we get more information from Disney soon. Be sure and subscribe to our newsletter below for the most up to date information about the phased reopening of Disneyland as it unfolds.

Do you think Disneyland will reopen Main Street U.S.A to Guests this holiday season? Let us know in the comments!

Comments Off on Holiday Decorations Spotted on Main Street in Disneyland!