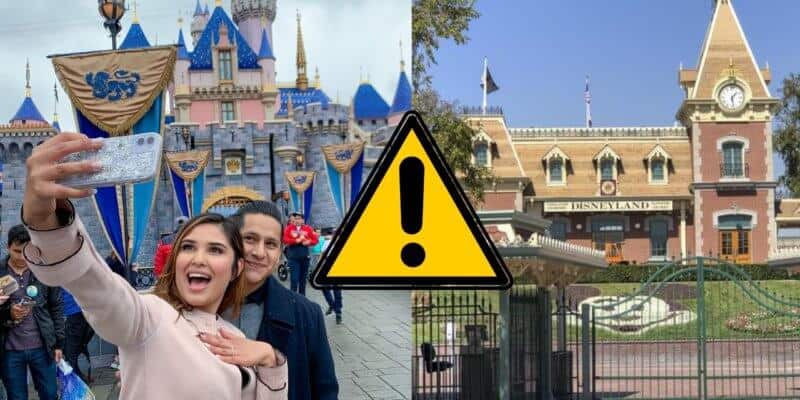 Yesterday Governor Newsom released the reopening guidelines for California theme parks, and Disneyland will be one of the last to open in California. 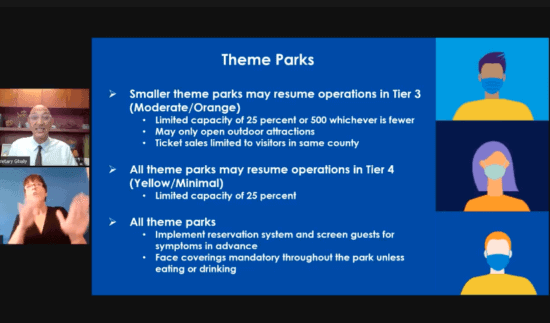 When Governor Newsom released the guidelines, the theme parks were broken into 2 categories: smaller and larger parks. Smaller parks were classified as capacity under 15,000 guests — large is anything more. Of course, Disneyland and Disney California Adventure would never be in the small category with Disneyland Resort’s normal capacity hovering around 85,000. Dr Ghaly stated:

“We did it looking at capacity and the nature of the sort of venues or attractions, and we did pick a capacity limit at 15,000 or fewer that would be considered the smaller theme parks, and anything larger that would be in the other category.”

But, if parks are going to reopen to a reduced capacity, why not just reopen all theme parks at the same time with the same capacity rates? This is a question someone had during Dr. Ghaly’s presentation of the reopening theme park guidelines. The answer is:

“The nature of the smaller amusement/theme parks is that they’re really local activities. They often don’t draw from broad communities, and they’re almost exclusively outdoors — they don’t have as many indoor venues or aspects of being indoors, even many of the eateries are outdoors. So for all of those reasons, we did set that difference. And as I said during the presentation that these are places where we are today. As we carry through the next weeks and months and we learn lessons from what happens in the near future, it may certainly change to our approach months down the road.”

The interesting thing here is that the reasoning for keeping Disneyland closed is because of the crowds it could drive in, which, according to Anaheim Mayor Sidhu, is exactly what they say they need right now. Local businesses and hotel chains only are able to survive when Disneyland is running, which possibly may not be until summer 2021.

What was the response to the guidelines?

Not one response that we saw from theme park officials in California supported Governor Newsom’s decision. In order for this larger category of theme parks to reopen, Orange County will need to enter Tier 4, when they currently sit at Tier 2. Many officials wanted the reopening to begin at Tier 3, as Tier 4 requires, “fewer than one new case per 100,000 residents per day, and a testing rate of under 2% a day”.

Anaheim Mayor said this decision is going to “destroy lives,” Disneyland President Ken Potrock said the guidelines are “unworkable, the CAPA called Newsom “unfair and unreasonable”, and Universal Hollywood even clapped back with an attitude-filled tweet.

It is safe to say that many have been left unsatisfied by Governor Newsom’s decision, and with it leaves us all wondering when Disneyland Resort will reopen. Unfortunately, that answer is now foggier than ever. With two Tiers to go, it could be from weeks to months for Disneyland to get the go-ahead to reopen under heavy restrictions.

Stay tuned to ITM as we continue to report the on-going closure of Disneyland and all California theme parks.

Do you think Disneyland should reopen in Tier 3 or 4? Let us know!