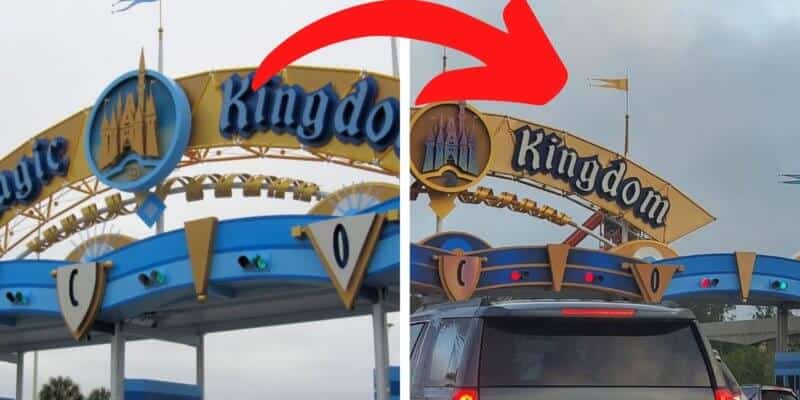 With the 50th anniversary fast approaching the Walt Disney World Resort, we are starting to see lots of cosmetic updates around Disney property, and the Magic Kingdom’s toll plaza has an entirely new color scheme going on!

As you can see below, the toll plaza that welcomes Guests into Magic Kingdom used to have a lighter blue, yellow gold, and white color scheme, that had definitely taken a hit from the Florida sun, with colors starting to really lighten. Just like the Walt Disney World Resort welcoming arch, the Magic Kingdom toll plaza marquee is a tell-tale sign that you are about to enter The Most Magical Place on Earth.

Construction and updates however have been underway with Cast Members hard at work revamping the new Magic Kingdom sign that welcomes you into the Disney theme park. We can see that Disney has decided to go with a much more regal look tying in deeper blue tones, more shimmering gold, and an iridescent pink that is giving us all of the rose gold vibes!

It will be awesome to watch this “Welcome” sign shimmer in the sunlight as you drive into the Magic Kingdom for the Disney World’s 50th Anniversary, and the deeper colors should allow the vibrancy to combat the sun rays for a little longer.

The sign also matches the Cinderella Castle paint job perfectly, which makes us think this could be a color scheme for the anniversary celebrations. Magic Kingdom’s castle has much deeper blues added to it, with the body of the castle wrapped in a lighter pink color. Previously, the castle was a lot more subtle with a pastel look to it.

As we previously mentioned, the entry way sign to the Walt Disney World property is also received a make over, and one that will tie in this royal blue color to the rest of the recent paint work on property. So far Magic Kingdom is the only theme park to see these new colors, but it will be interesting to note if EPCOT, Animal Kingdom, or Disney’s Hollywood Studios follows suit, and if so, what ends up being painted. 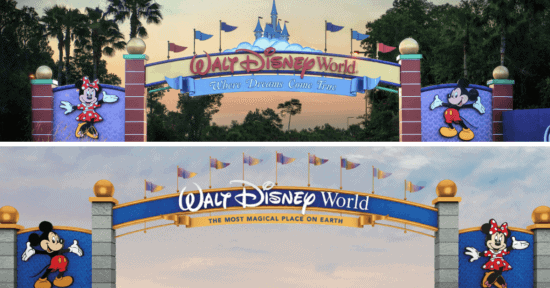 If you want to be at Disney for the 50th Anniversary, click here to begin planning your Disney World vacation today to celebrate with Mickey Mouse and all the gang!

What do you think about the new color scheme Disney World is implementing?

Comments Off on Magic Kingdom’s Entrance Has a New Rose Gold Look!