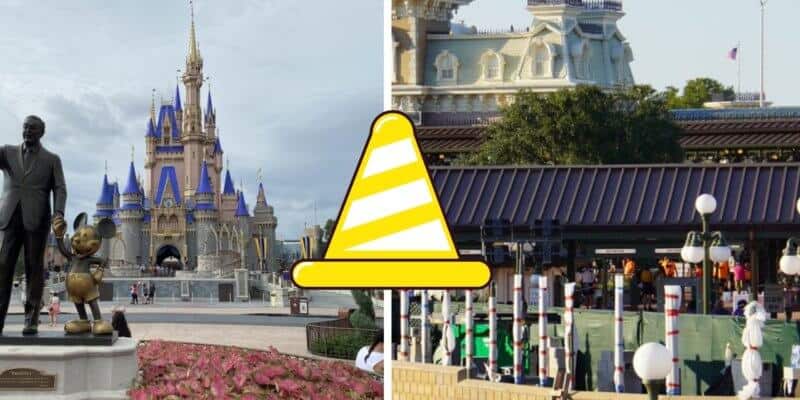 When it comes to any Disney park, we are always seeing changes and additions to help continuously reinvent the theme parks and keep them magical. With Walt Disney World Resort being the largest of any Disney Resort, you can bet there is always some sort of construction going on. Right now is a very busy time for Disney World, with new attractions such as Tron Lightcycle Power Run — furthermore, EPCOT’s Future World is a giant construction site and even Disney Resorts like the Polynesian have begun major re-theming.

There are more construction projects we could list at Disney World, but today we are going to focus on the entry way to Magic Kingdom. Magic Kingdom is one of the busiest Disney theme parks in the world, considering it’s Orlando’s castle park. With thousands of Guests experiencing the magic each day, it’s important that the entry way runs smoothy and efficiently for busy mornings and evenings.

We have been reporting the recent construction at the MK entrance which excitingly includes a new dock, which could possibly mean more frequently running ferries! If you have ever exited Magic Kingdom after Happily Ever Fireworks let out, you know that another form of transportation to the TTC is never a bad idea with the crowd levels that ensue.

Thanks to b@ioreconstruct on Twitter, this hope seems to be more promising. As we can see below, there is a new security fence that has been added near the ferry docks at Magic Kingdom. If more ferries will be running, this means there will be an influx of the amount of Guests entering the Disney park at the same time. Extra security entrances will be important in that case to help manage crowds and keep Guests safely away from the water. This has not been confirmed by Disney. However the construction leads us to believe this may be the reason for the new fence.

Seems like a security fence will be here soon in front of Magic Kingdom, near the ferry docks. pic.twitter.com/gmzb9aU7ce

@bioreconstruct also was able to give us a glimpse into the new dock at Magic Kingdom. It seems like there is still a lot of work to go, but with reduced capacity hitting Disney World at the moment, more transportation methods aren’t a necessity at the moment. This would become a much more useful project once the 50th Anniversary of Disney World rolls around next year as huge crowds will flock to the parks to celebrate — provided capacity limits have increased at that time! We are not sure what Disney’s timeline is on this project, but having it complete for then would make sense.

Current work at the new dock at Magic Kingdom. pic.twitter.com/9R4BYKFxlC

For now, ITM will continue to update you on any Disney construction updates, just like this one at the Magic Kingdom entry way!

Do you think there needs to be more done to the MK entrance? Let us know!