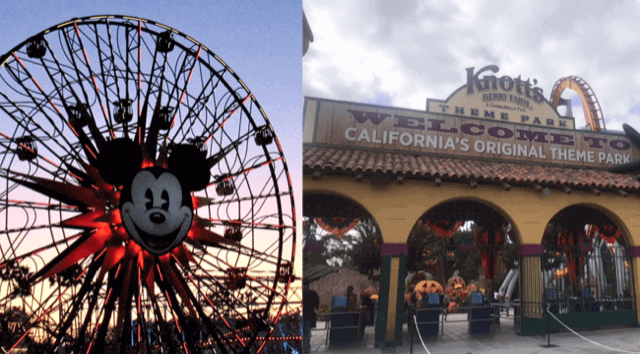 With the recent news of Disney California Adventure reopening some of their shopping and dining experiences, Disney fans are excited to say the least! With theme parks not fully reopening any time soon, we here at ITM took a quick trip to Knott’s Berry Farm to see what it would be like for the Disneyland Resort to offer something similar.

Knott’s Berry Farm is open in a limited and safe way. They have phased their reopening to offer a new event the Taste of Fall-o-Ween! This currently sold-out event is offering different tastes of the fall season throughout the park, similar to how we’ve seen the Food and Wine Festival take place at Disney California Adventure.

Upon arrival, we noticed that there is plenty of signage throughout their Marketplace area and park to remind visitors of social distancing and to wear masks. There were also plenty of hand sanitizing stations — just as we’ve seen in Downtown Disney.

The Taste of Fall-O-Ween was executed very well. There was plenty of outdoor seating and the seating areas were all appropriately distanced. Even the tasting stations were decently spread out through the park. There were plenty of eats to choose from. And with everything so strategically spaced out, the park didn’t feel crowded at all.

Just as we see in Downtown Disney at Disneyland Resort, we also noticed plenty of Knott’s staff around that were constantly cleaning seating areas. When a group would leave a seating area, there always seemed to be a staff member around with cleanser, paper towels, and other cleaning supplies to prepare a table or area for anyone else. This was great to see that the park was keeping up with health and safety measures.

During this fall season at Knott’s Berry Farm, the theme park is also offering a Camp Snoopy Trick-or-Treat Trail. This experience is available to all guests with a purchase of a treat bag or Junior Taste of Fall-O-Ween tasting card. The treats were distributed safely with socially distanced markers in place for lines, but as we noticed, none of the lines seemed too long or crowded either. They even had characters placed a safe distance away, but offered great opportunities for photos.

Altogether this was a great experience, and it felt good to be in a theme park again in a safe manner. However, it did get us thinking and raised the question: “Why can’t Disney do this?”

Now, with the Disneyland Resort expanding their shopping and dining options to include a piece of Disney California Adventure, this opens up a big door for future possibilities — until the resort fully reopens, that is. This could potentially lead Disney in the direction of bringing back the Food & Wine Festival or the Festival of the Holidays. As we’ve seen through the event at Knott’s, this can be done in a safe manner with reservations and limited capacity.

If Disney were to bring back the Food & Wine Festival, that would be huge! Not only would it allow for more opportunity for the influx of Guests visiting the Downtown Disney District every week, but also it would also allow for more recall opportunities for Cast Members that have been furloughed and laid off. If the parks remain closed through the end of the year, Disney could use the Food & Wine Festival at the beginning of 2021 to bring in some money for the parks. This means everyone wins!

There is also plenty of possibility for a food festival because of all the space among both parks. Disney could utilize the whole layout of the parks. This would provide plenty of safe and socially distanced seating outdoors. They could even implement the Mobile Order system through the Disneyland App, as they have done with past festivals. It has the potential to be a major success!

These phased reopenings and possibilities of food festivals are a great sign of moving forward for the closed theme parks. They provide great potential for more jobs and more revenue. And let’s face it, getting to experience our favorite theme parks would be incredible!