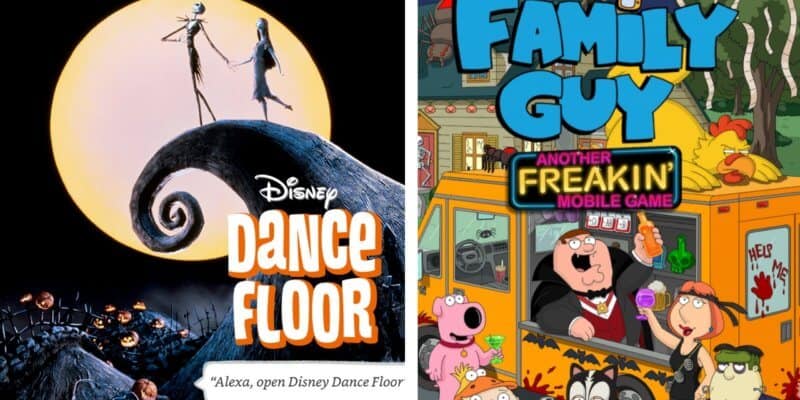 Disney has released another Hallo’Moments blog post where we discovered all of the Halloween games Disney was bringing to our phones! Disney has teamed up with 20th Century Games which is now bringing Tim Burton’s The Nightmare Before Christmas, Hocus Pocus, Disney Villains, American Dad!, and Family Guy to your favorite device.

Mickey’s Not-So-Scary Halloween Party may have been cancelled this year, but Halloween is still in full swing at Disney! If you can’t get to the Disney parks this Halloween season, why not bring the spooky magic of Disney to your phone? Disney has created a whole bunch of Halloween games you can play on your phone via a few different apps.

Luckily, Disney Parks Blog has all of the news games listed, and where you can find them:

Experience Halloween all October long with special events in Disney Emoji Blitz! Unlock new spooky Emojis from “The Nightmare Before Christmas” and “Hocus Pocus,” as well as appearances made by Exclusive Disney Villains Emojis from “Peter Pan,” “The Princess and the Frog,” “The Sword in the Stone,” “Cinderella,” and more. Players will also have opportunities to collect free treats from giveaways throughout the month.

Here’s a peek at the event lineup:

All players who log in starting October 8th will be able to take part in themed tapper events… and earn unique and spook-tacular rewards! Additionally, a mini in-game Halloween event begins on October 23rd, in which players will be able to welcome Lock, Shock, and Barrel from Tim Burton’s “The Nightmare Before Christmas” as playable characters, while enjoying a storyline that will leave their skin crawling for more…!

Last but not least, players will be able to unlock the Oogie Boogie Spin Attraction and the Haunted Mansion Minnie Ears Stand.

‘Family Guy: Quest for Stuff’
The gaming fun continues as players embark on an all-new Halloween adventure in “Family Guy: Quest for Stuff” when you log-in starting October 14! With Halloween just around the corner, the whole town gets dressed up in preparation. But weird things start happening to the townspeople when they all eat old candy that has strange effects. If they want things to go back to normal, Peter, Quagmire, Chris, and the rest of the town must all survive their own active imaginations, while keeping the town from destroying itself.

Celebrate Halloween in “American Dad! Apocalypse Soon” with a special collection event inspired by “The Best Little Horror House in Langley Falls” episode. Log in October 19 to enjoy a new Halloween Quest board featuring Buckle’s Haunted House. Players will be able to unlock Halloween-themed Roger armor, while enjoying characters wearing their Halloween costumes from the episode. This event will be available between October 19 and November 1.

Family Guy: Another Freakin’ Mobile Game
Jump into Family Guy: Another Freakin’ Mobile Game to enjoy special events and offers to celebrate Halloween! Complete various puzzles as you try to beat other food trucks in a Halloween-themed Food Truck Wars on October 27. All players will be able to make in-game purchases during a Halloween sale October 30 to November 1.

Turn your living room into your very own Halloween Party with the Disney Dance Floor skill, available on Amazon Kids+! Put on costumes and groove with the Disney DJs as they spin remixes of songs like “This is Halloween” from Tim Burton’s “The Nightmare Before Christmas” and “Grim Grinning Ghosts” from the Haunted Mansion Disney Parks attraction!

Get the whole family to try scary silly dance moves like the Trick or Treaters or the Doombuggy!

For more family fun, be sure to check out the Monstrously Fun Match Game with this free downloadable featuring everyone’s favorite monsters and aliens from “Monster’s Inc,” “Lilo and Stitch,” and more, or enjoy a night of screams and scares when you celebrate #DisneyPlusHallowstream and tune-in to watch your favorite monsters and aliens with “Monsters Inc.” and “The Simpsons: Treehouse of Horror” on Disney+.

So if you want to get spooky on your couch this Halloween season with a bag of treats next to you, check out some of the new Halloween inspired Disney games. You can find them on Disney Sorcerer’s Arena, Disney Emoji Blitz, Disney Magic Kingdoms, and Amazon Kids+.

What game do you want to play this Halloween season?