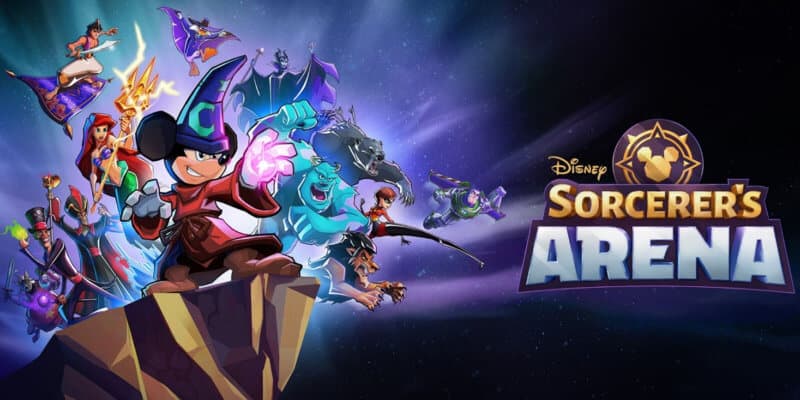 If you’ve ever wanted to fight alongside your favorite Disney princesses, or join the forces of evil with classic Disney and Pixar characters, check out Disney Sorcerer’s Arena! The action-packed mobile game is currently available to download on the IOS and Android app store for free!

Team up with an expansive roster in the Heroes campaign, with well-known favorites like princess Ariel and Pixar legends like Buzz Lightyear and Sully as you battle against forces of evil. Or for a twist, enter the Villains adventure, and team up with the likes of Zurg, Yzma and many more to battle against the heroes!

Published by Glu Mobile, the game is worth the play even just to see so many classic legends collide. The range of heroes and villains is truly expansive; if you can think of a Disney character, chances are, they are featured in the game. What other game can you have sorcerer apprentice mickey team up with Darkwing Duck to battle teams made up of characters like Scar and Captain Hook?

Related: Missing The Disney Parks? Bring The Family Together With These Disney Games!

Sorcerer’s Arena is not turn-based, but a real-time strategy RPG. Each character and spell is collected via a system of collecting cards and character tokens. Cards can be acquired via in-game currency and real-life currency for small fees. This means the game can be played entirely for free, but many features can only be obtained or obtained much earlier through micro-transactions. Completing daily quests and other quests that often require using certain abilities or fulfilling certain criteria in battle. As you build a battle-ready deck, you have the ability to level up each character and upgrade their skills.

Each battle takes place on a grid, with each character taking up one space and having the ability to move. As the game is real-time and not a turn-based RPG, characters will act on their own, but can also use character abilities straight from their respective Disney franchises. The player also has access to magic and can draw upon Disney parks attractions to fight as well!

Looking for even more of a challenge? While the game can be played as single player, you can also take advantage of the game‘s player-vs-player arena(PVP arena) to battle your friends or other players of Sorcerer’s Arena! Form your perfect team against others in real-time PVP combat.

Have you previously played Disney Sorcerer’s Arena, or plan on downloading it? Let us know your thoughts below!