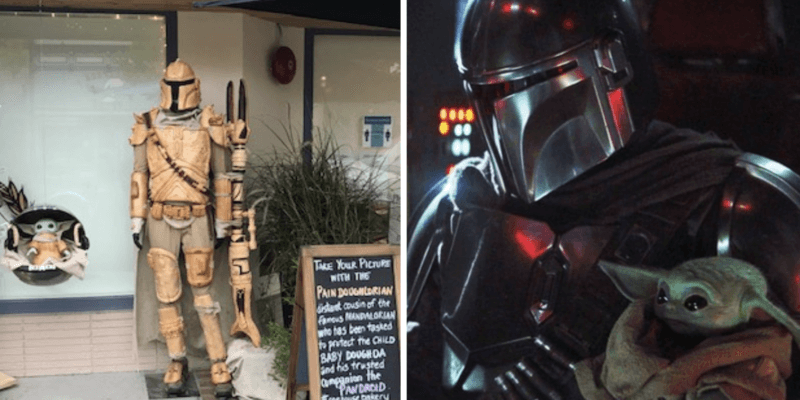 A Bay Area bakery has given characters from the hit Disney+ series The Mandalorian a brand new look, using bread dough!

One House Bakery in Benicia, California put together these ‘Man-dough-lorian’ figures ahead of the debut of Season 2 of the Star Wars show on October 30.

According to Mercury News:

Hannalee Pervan, head baker and co-owner of One House Bakery, worked on this project for two weeks with her mother and co-owner, Catherine, before unveiling the edible series Oct. 11 as part of Benicia’s Annual Downtown Scarecrow Display.

The dough Pervan used is called “dead dough,” a decorative dough made with flour and a solution of sugar and water. The duo spent roughly 150 hours working on the series, mostly in the lulls between the breakfast and lunch rush, and the lunch and dinner rush.

The story also shared details about what each character — The Child (AKA Baby Yoda), IG-11, and Din Djarin himself are all featured — is made from:

Baby Dough-da is floating in mixing bowls. The Pandroid is made out of pans. And the Pain-dough-lorian, of course, needs no introduction.

True to form, Mandalorian showrunner Jon Favreau and his team, including Dave Filoni, haven’t divulged many details about what fans can expect in the sophomore season of the Disney+ series.

We do know, however, that numerous new characters — including fan-favorites from animated shows Star Wars: The Clone Wars and Star Wars Rebels — will be introduced in live-action form for the first time. Ahsoka Tano (Rosario Dawson) and Bo-Katan Kryze (Katee Sackhoff) are both set to appear, alongside iconic Star Wars bounty hunter Boba Fett (Temuera Morrison).

What Mandalorian Season 2 storylines are you hoping for? Do you think the Darksaber will play a key role this year?

Comments Off on ‘The Man-Dough-Lorian’: Bakery Creates Life-Size Models From Bread!