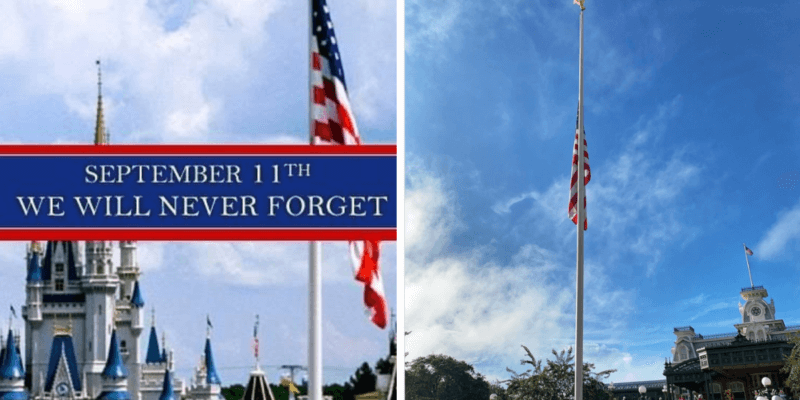 19 years ago today, America was hit with the deadliest attack since the Pearl Harbor bombing — Commercial planes hijacked by terrorists were flown into the Twin Towers of the World Trade Center in New York City, the Pentagon building in Washington, D.C., and into a field in Pennsylvania. Almost three-thousand lives were lost. When this occurred, the Walt Disney World Resort and Disneyland Resort immediately closed for the day.

19 years later, America still remembers. In remembrance of those who lost their lives, the American flag that is raised and flown prominently in Magic Kingdom at Walt Disney World every day is being flown at half-staff today for September 11.

Disney fans have taken to social media to share the flag in Magic Kingdom flying half-staff and sharing their own thoughts on the day.

Instagram user @wish_with_ila wrote, “Wherever you are today, we still remember 19 years later.”

The Walt Disney World Resort and the Disneyland Resort closed its gates on September 11, 2001, marking one of the only occasions–at that time–when the resorts closed.

Both resorts have always been a source of American Patriotism from its Americana-inspired themed lands of Main Street U.S.A., Liberty Square, and Frontierland to its attractions like The Hall of Presidents and The American Adventure in EPCOT.