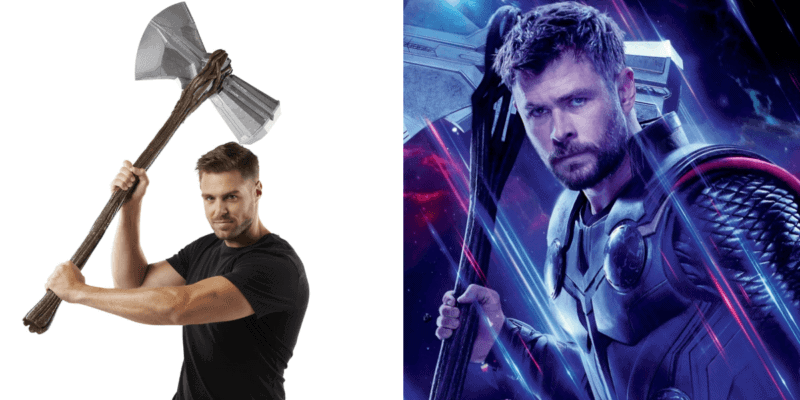 If Thor is your favorite Avenger, then boy you’re in luck. Hasbro and Marvel have dropped a first look at their life size Stormbreaker toy and it is magnificent.

The axe was famously wielded by Thor during the events of Avengers: Infinity War and Avengers: Endgame, where it instantly became a fan favorite.

Now you can feel like Thor Odinson himself be wielding his second most iconic weapon! If you are a fan of the life size Infinity Gauntlet prop, don’t miss out on this incredible replica. It’s a must for any Marvel fan, comic book geek, or would-be hero!

Become the God of Thunder with this life size Stormbreaker toy

This Stormbreaker toy really is the thing that dreams are made of. It’s life size and has FX functions which are activated by pressing a small switch near the ‘blade’. By the looks of the pre-release photos, the axe will light up red and purple depending on the setting. Users will also hear sound effects and feel the rumble in their hands as they wield the mighty weapon.

Unlike in the Marvel Cinematic Universe where it was powered by the force of a star and Dwarven metals, this Stormbreaker takes two AAA batteries to get it powered up. The toy axe comes at a cost though, and it isn’t subjecting yourself to the energy of a star. Hasbro’s life size Stormbreaker will set you back $159.99, though to feel like the God of Thunder, is that really such a high price?

You can pre-order this epic weapon at Hasbro’s website.

The Stormbreaker axe in the Marvel movies

Marvel fans were gutted to see Thor’s hammer ‘Mjolnir’ effortlessly destroyed by his evil sister Hela during the events of Thor: Ragnarok. Thankfully, Avengers: Infinity War gave the strongest avenger a new weapon, with a little help from the dwarf Eitri and two of the Guardians of the Galaxy; Groot and Rocket Raccoon.

After Thor subjected himself to the force of a star to get the forge ready, Stormbreaker was formed. The axe has many abilities and it can even call forth the mystical ‘Bifrost’ to transport Thor and his allies across the universe in no time at all.

In Avengers: Endgame, a distraught Thor beheaded the mad titan Thanos in a fit of anger using Stormbreaker and morbidly repeated his earlier taunt saying ‘I went for the head’. Thor’s emotional journey into a past Asgard eventually reunites him with Mjolnir. He and a worthy Captain America even momentarily swap weapons during the battle at the Avengers Facility.

Stormbreaker ultimately remains with Thor as his primary weapon as Captain America returns Mjolnir to its own time period.

Marvel Studios’ Thor is one of our favorite avengers and his mighty weapon has certainly seen a lot of action. We can’t wait to see it turn up in Thor: Love and Thunder. Until then, we’ll have to make do with this incredible replica!

Still looking for an awesome replica of Marvel’s avengers apparel? Check out these insane replicas of Iron Man’s armor, over at Full Body Armors. Marvel Studios’ Iron Man is perhaps the MCU’s most iconic hero. These suits allow you to become Tony Stark and are more impressive than even the most detailed Hot Toy!

Will you be purchasing this life size Stormbreaker toy? Let us know in the comments below.