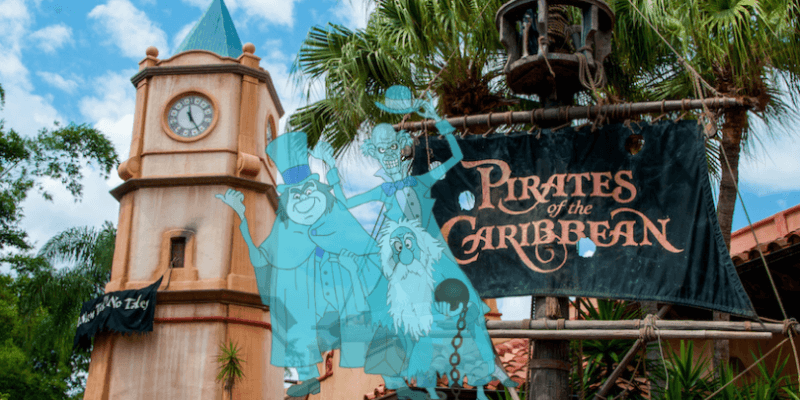 Last week we broke down a list of paranormal Disney urban myths and legends. One revolved around a mischievous ghost that is said to haunt Walt Disney World’s Pirates of the Caribbean ride, named George. For Disney fans, and especially Cast Members, he’s a well-known spectral figure. But how much truth is there to the tale of George the Pirates ghost?

Here’s everything there is to know about this Walt Disney World urban legend.

There are a few variations on the George mythos, but the basics are as follows. George was a construction worker hired to help build the brand new Pirates of the Caribbean attraction at the upcoming Magic Kingdom park.

During construction, George either fell off of or was crushed by a large piece of set (possibly a falling beam) killing him instantly. Some variations of the myth say that the tall windowed tower that can be seen during the well dunking / burning city scene is the piece of set that killed George. Some Cast Members now reportedly refer to this as ‘George’s Tower’ and it allegedly contains his initials carved into the base. Supposedly, all attempts to remove the initials are fruitless and they’ll always reappear, even if painted over.

Shortly after the theme park opened, a sad looking older woman would periodically visit the attraction and ask to ride alone. Cast members then reported seeing her speak to nobody and sobbing into her ride boat. As you’d expect, she was revealed to be George’s heartbroken mother.

Now George haunts the Walt Disney World attraction and will make life difficult for cast members and guests, lest they show him the proper respect.

What Does George Do?

George the Pirates ghost isn’t a malicious spirit, but he is a mischievous one. The most famous part of the myth says that cast members have to wish George a good morning and farewell at the start of the day and before they leave at night. If they don’t, he’ll make life tough for them by causing the Pirates of the Caribbean ride to malfunction and breakdown throughout the day. Allegedly, some Cast Members will even blame issues on the evening team for not saying goodbye to George the night before.

Apparently, George will even respond to guests if they demonstrate a bad attitude and will punish them for their complaining by messing with the ride. Some say that George has a thing for haunting female guests too, as there have been reports of women feeling a hand pat their rear or pull their bra strap. As you’d expect, when they turned around, there was nobody there.

According to some versions of the myth, if the light in George’s tower is switched on during the burning city scene it means a difficult day is ahead. Another account says that the door behind the iconic prison dog is also related to George’s spectral antics. Apparently, if the door isn’t shut by cast members, you can expect ghostly happenings and paranormal activity. If both the door is open and the tower light on…well, maybe just head to Disney’s Hollywood Studios park on that day instead.

Some reports also say that George’s curse will lead to other ghostly annoyances for any person dressed in a pirate costume. Cast members have reported seeing ghostly apparitions on the monitors and have received phone calls from no-one seemingly all thanks to George, the Pirates of the Caribbean ghost.

So is There Actually a Pirates of the Caribbean Ghost?

As with any paranormal investigation, concrete evidence to support George’s existence is pretty difficult to find. Numerous Cast Members who worked on Pirates of the Caribbean will tell you about the myth and the ‘Good Morning George’ routine, but incidents have reportedly decreased substantially since 2005. As such, it seems pretty likely that the consistent breakdowns were just a mechanical fault that Walt Disney World engineers were eventually able to fix.

To throw even more sea water on the curse of George the Pirates ghost, there are no reported deaths of a construction worker at Pirates of the Caribbean. The ride has certainly had its fair share of incidents, but there’s nothing to suggest that a worker died during its initial construction in the early 70’s.

However, this doesn’t mean that George isn’t real. Ghost stories all originate from some element of truth, after all. So the next time you board a pirate boat and take a trip round the Caribbean with Captain Jack Sparrow, be sure to be polite and courteous. And if you see that light on or that door open, maybe wish George a good day. It doesn’t hurt to appease a ghostly friend when you’re out on the Caribbean sea!

What’s your take on the George story? Let us know in the comments below.