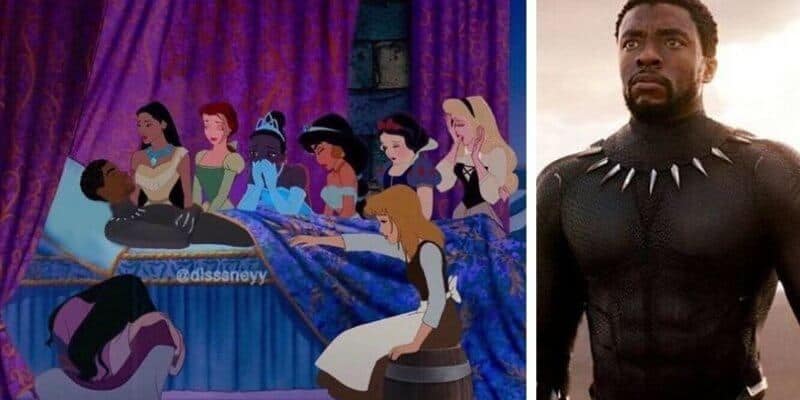 The past week has not been easy for Disney and Marvel fans. On August 28th, Marvel’s Black Panther star Chadwick Boseman died after a four-year battle with cancer. The news came as a shock to everyone.

Since the Boseman’s passing, Disney and Marvel have released heartfelt statements on their social media about their friend and colleague. Actors from the Marvel movie franchises and Disney films like Chris Evans, Robert Downey, Jr., Josh Gad, known by Disney fans for being Olaf’s voice, and many others have also shown deep sadness towards Boseman‘s passing.

Then there were the fan tributes. And they flooded social media. After all, Chadwick Boseman and the film Black Panther broke ground by being Marvel’s first black superhero and Hollywood’s most prominent black superhero movie!

One tribute to the late actor, in particular, caught the attention of our ITM team. Artist and Instagram user Rupali, @dissneyy posted a powerful tribute to Marvel’s beloved actor.

Sorry for not posting, it’s been a very hectic month!! ? Anyways, I was very sad to hear the passing of Chadwick Boseman so I made this edit to honor him. May he Rest In Peace ? everyone will miss you! #wakandaforever ? . . . . . . . #disney #love #chadwickboseman #blackpanther #art #fan #edit #princesses

In the fan art, Chadwick appears as his Black Panther character King T’Challa. It is a deep and powerful message, that not only expressses the grief felft for the actor and his loved ones but also expresses the feeling of loss that all of Marvel and Disney felt with the passing of its star actor.

Rupali collected parts of several Disney princess movies, in scenes that the princesses are in emotional distress or crying to make this incredible digital collage.

It is with immeasurable grief that we confirm the passing of Chadwick Boseman.⁣ ⁣ Chadwick was diagnosed with stage III colon cancer in 2016, and battled with it these last 4 years as it progressed to stage IV. ⁣ ⁣ A true fighter, Chadwick persevered through it all, and brought you many of the films you have come to love so much. From Marshall to Da 5 Bloods, August Wilson’s Ma Rainey’s Black Bottom and several more, all were filmed during and between countless surgeries and chemotherapy. ⁣ ⁣ It was the honor of his career to bring King T’Challa to life in Black Panther. ⁣ ⁣ He died in his home, with his wife and family by his side. ⁣ ⁣ The family thanks you for your love and prayers, and asks that you continue to respect their privacy during this difficult time. ⁣ ⁣ Photo Credit: @samjonespictures

Fan artwork like this is a fantastic representation of the love, compassion, and dedication Disney, Pixar, Marvel, Avenger fans have to their favorite movies and franchises.

Thank you @dissneyy for this beautiful and heartfelt tribute. Thank you Disney and Marvel for bringing Black Panther to life the way you did, and thank you, Chadwick Boseman, for being our King T’Challa.

If you know of any other amazing Disney inspired fan art around, let us know in the comments below.