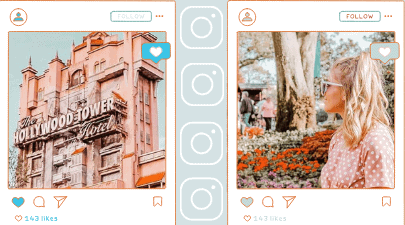 Lately, the theme parks have been experiencing changes at a quick velocity. They’ve had to adapt to the new landscape of pandemic life in the tourism industry. With that has come a whole new world of safety rules and procedures that Disney has worked hard to make magical and to seamlessly integrate into regular park life, as best as possible.

The ongoing changes to some of our favorite magical lands at both Walt Disney World and the still closed — Disneyland — have left many unsure of what to expect. One very specific niche — Disney Instagram bloggers — have staked a lot of time and energy on sharing their love of the Walt Disney Company and the Disney parks on social media.

They use their influence to share colorful, whimsical photos, tell stories and keep audiences all over the globe engaged in the Disney magic. But with the extended closures of both parks in the US, these inspiring creators have had to adjust to a shift in their far-reaching the creative outlet.

We had a chance to catch up with a few amazing Disney Influencers and speak with them about how the latest Disney park updates and cancellations have affected their hobby and what their thoughts are on all of the measures that have taken affect for our safety.

If you’re a big Disney fan, be sure to give them a follow for some daily magic — even away from the parks!

Pros: Equalizes everyone no matter where they live or their socioeconomic background to create – since the parks are closed, there’s no distinction between a premier passholder and someone that goes once every 5 years to the parks. There’s no pressure to be the first to get that picture of the new food or buy new merch – it helped me put my consumeristic tendencies in check.
Cons: I miss the dreamy atmosphere and my friends. I miss the social aspect of getting together at the parks to create.

I have actually taken a step back from the pressure I put on myself to post daily. This has really helped me to reevaluate what and why I post. I have done a lot more on YouTube and found creative ways to share my comfy Disney style at home. I also started putting my creativity into making a small shop of embroidered linen hoops called ShopTinkerbail. This has helped me to find a creative outlet for content that isn’t only on a screen.

When I came up with the idea of characters at home during quarantine, I was thinking of points to talk about surrounding the character and to get creative with the clothing items I have at home and how I can apply it to a character!

So for example, Elsa being at home perfecting iced coffee, Rapunzel focusing on yoga and meditating, Ariel getting fresh air in a safe way. It just continued from there! Mickey doing at home spa days, Donald getting frustrated at people not following rules and Goofy trying out all the food delivery services! I have expanded from those starting points and expanded to more themes like Star Wars and coffee, Monsters University and so on! Recently I have been incorporating my iPad more into my designs and focusing on funky backgrounds or lettering.

Do you think that the Disney Magic is still powerful in the parks, despite low crowds and the lack of parades/fireworks/shows?

The magic is still there! I actually have been back at the parks a few times but decided to not story because I wanted to absorb it with low crowds because I may never experience that again in my life. I got to enjoy more rides, enjoy the company I was with and I didn’t feel stressed to make it for a fast pass, it was wonderful! Also, the cast members have been fantastic and I’m so thankful for them! They are going to work to create magic for us and they deserve so much love in return!

Immensely! I didn’t realize just how much I relied on Disney’s iconic walls and backdrops for content. Without that to rest my content on, I had to think outside of the box – super creatively, proactively, and most importantly, super authentically.

My Instagram is truly a piece of my happy place, so it brought me joy to continue posting, even if my pictures were taken in my front yard. I am a Pinterest STAN. I have endless boards of outfit inspo, amazing edits, cool poses, etc. But I also find a lot of inspiration from other creators in the community!

Without the parks being in the main focus I was able to focus on some things that I may have only touched on slightly before! I love exploring and sharing Florida, whether that be through long drives to get out of the apartment, visiting state parks or as of late, visiting vintage and antique shops and searching for the best Disney vintage. Coming up with ideas is usually sparked late at night right before bed, which is when I feel my most creative! Although, if I don’t write it down before I fall asleep then…

Pros- creativity explosion! Trying new things, ways to take photos, at-home magic, and appreciation for what we had before. I was always grateful for what I was able to experience, but I look back on those memories and my heart soars. Never take for granted what you have in your life.

Cons– Missing the Parks, of course.

I completely agree with it being a positive effect! Everyone has had to really get creative and find magic in their homes. It’s so easy to rely on the parks as a way to get content, but I am so glad that it isn’t the case for me anymore! I love the parks so much, they are truly my happy place, but I am so grateful that my content doesn’t revolve around it in the same way as before because I never wanted to lose my appreciation for the parks.

Do you think that the Disney Magic is still powerful in the parks, despite low crowds and the lack of parades/fireworks/shows?

I believe Disney magic may be present now more so than ever. Sure the parades and firework spectaculars provide a level of magic unmatched by many, but it’s the atmosphere and cast members that truly make the parks so special, and it is easy to see that the cast members have been more than ready to make magic again for the people who appreciate it the most. That’s the most special thing about it all: Disney is a state of being that we find inside ourselves, Because that, my friends, is where the magic lives.

I think the biggest con of the park closure is that we could no longer be present in the park in order to create content. For the Disneybounding community, we tend to spend a lot of time at the parks shooting photographs in locations that fall in theme with whatever character or concept we may be bounding as.

However, being stuck in my room left me a lot more time with my imagination, and I think I certainly benefited from it. One thing I often communicate to people is that “sometimes we have to make our own magic,” and I think the park closure really tested that. So it pushed me to develop a style of magic and storytelling that I didn’t think I was capable of. And now it has allowed me to meet so many friends who understand the power of Disney storytelling.

Be sure to follow each of these accounts for more daily magic away from the Disney parks!