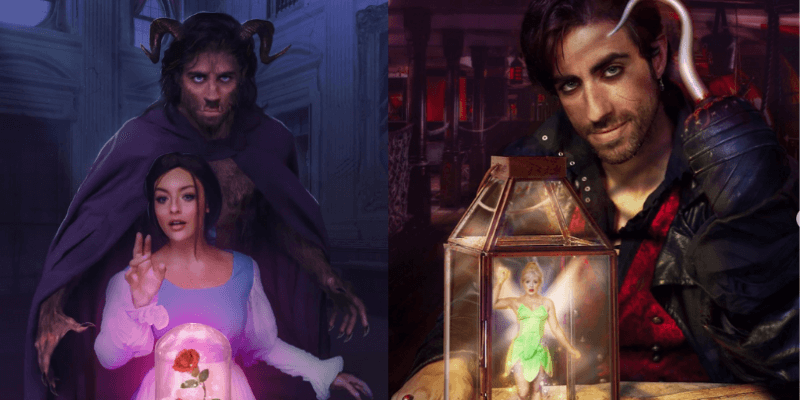 If you enjoy following digital creatives who take their love of Disney to the next level, you’ll want to check out well-known Instagrammers’ Leo Camacho and Rachel Martino.

Leo Camacho is a digital artist who is known on Instagram for his love of cosplay, Disney and his intricate photography projects that leave viewers in awe and constantly wanting more. Rachel Martino is a New York based fashion and beauty blogger who frequently takes on the persona of pop culture characters in her style pieces.

But a love that they both share — that even goes back to how they met — is Disney and the joy of Disney cosplay.

From the very beginning of the pandemic and continuously throughout quarantine, this Instagram duo has created elaborate and magical digital Disney art shared with their thousands of followers on social media.

Their most recent Disney projects stemmed from Rachels series — Characters in Quarantine — and even featured a creative “choose you players” video of them as some of our favorite royal duos. My favorite character she embodied was Rapunzel, which you can check out here.

The pair have stepped up their Disney art projects recently with a series focused on iconic Disney Princess films and creating realistic images that look straight out of a Disney film.

The couple took the internet by storm when they shared their first photo in this project themed after The Little Mermaid. Martino played the bubbly princess Ariel and Camacho stepped into the role of Eric, one of the most popular Disney princes.

Since the overwhelmingly positive feedback on this edit, the couple went on to create Captain Hook and Tinkerbelle as well as Belle and the Beast with the enchanted rose. They also highlighted the classic villain in Disney’s Beauty and the Beast, with a photo focused on Gaston and his admirers.

They shared almost the entire process from start to finish, for those interested and let on that the digital editing for these projects takes upwards of 10 hours! As a major Disney fan, I definitely appreciate what a talented Artist Camacho is for creating such detailed and magical work.

While not quite to the same detailed degree as their more recent joint projects, Martino has spent time recreating Disney princesses in the past, focusing on their classic look and the cosplay element. We absolutely can’t wait to see what cool concept they come up with next for their incredible fan art and hope they continue recreating Disney princesses and other iconic characters.