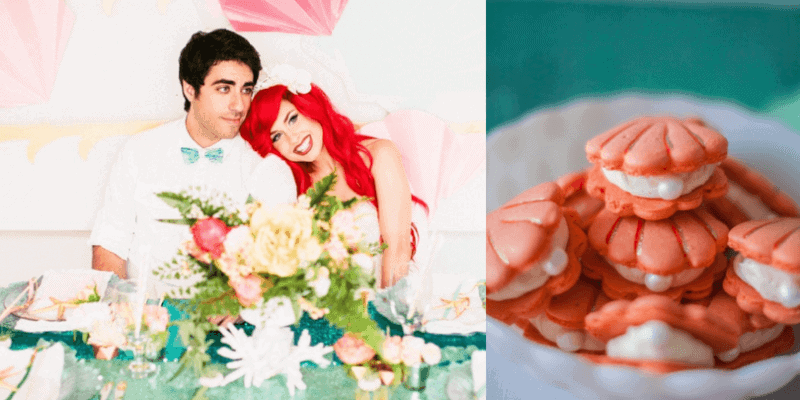 Have you ever wondered what it would be like to create a modern-day Disney wedding inspired by classic princess and their stories? Back in 2014, a talented team of Disney fans — each with special skills and trades — came together to create a photoshoot story inspired by The Little Mermaid.

Despite this shoot taking place many years ago, it has recirculated the internet — once again wowing Disney lovers world wide with it’s creativity. What makes it such a popular photoshoot? To me, the magic lies in the details! The designs of the hair, gown, cake and decor are all absolutely stunning, nodding loosely to the original film, while also being doable feats at a modern Disney wedding.

Also the photography of the project its incredible. It immediately sucks the audience into the story and makes you feel like you are truly at Ariel’s modern wedding.

Inspired by a Disney Film and a Beautiful Princess

The team that put the photoshoot together, told Popsugar:

“Many children dream of their future wedding, and most of our romantic notions about love come from childhood dreaming with a cast of fairy tale characters. In the spirit of that romantic nostalgia, we are excited to share this amazing fantasy photo shoot. The vision behind this shoot was to re-create the classic “tail” (pun fully intended) of The Little Mermaid, and transform Ariel (modeled by singer/designer Traci Hines) and Prince Eric (modeled by Leo Camacho), into a modern hipster wedding couple!”

Disney-inspired photo shoots have become increasingly popular within the Disney community or Disney fandom, as it’s often coined. The man portraying Prince Eric in this throwback shoot –Leo Camacho — has made quiet a name for himself over the years through various social media channels for some of his DisneyBounds and artistic renditions.

Camacho recently re-lived his role as Prince Eric in an incredibly thought-out photo shoot involving his girlfriend (fellow influencer) Rachel Martino portraying Ariel. His work as a digital artist absolutely wows, and he dedicates a lot of time and effort into his craft. In a recent instagram story, he shared that his latest fin-tactic Little Mermaid project took upwards of 10 hours!

As a big Disney fan myself, I absolutely love seeing content creators putting so much energy into creating these compelling photos that bring magic to life for all of us.

Which character would you do a Disney photoshoot for?