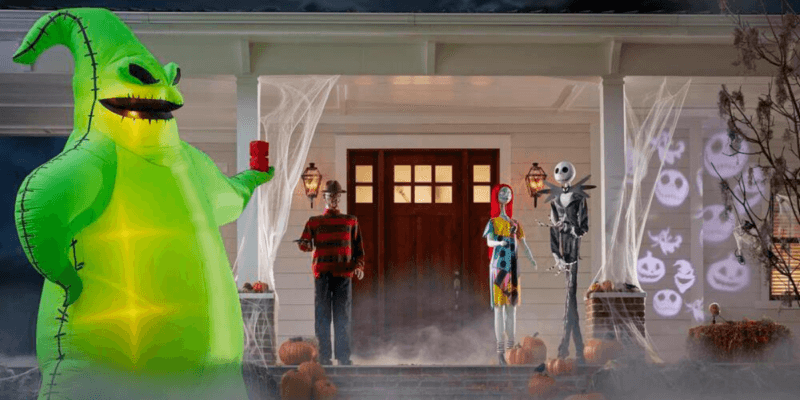 Halloween 2020 is already exciting enough. It’s going to be on a Saturday night with a full moon in the sky and it is going to be an extra hour longer because of the time change.

Well, we found some Halloween decor, and Halloween just got more exciting.

Home Depot is now selling inflatables of the iconic baddie from Tim Burton’s The Nightmare Before Christmas, the one and only Oogie Boogie Man.

Oogie Boogie stands 10.5 feet tall, fitted with LED lights. With his notorious red dice in an open hand, he boats a wide, crooked smile as if to invite all trick-or-treaters coming to your door into a dangerous game of change. Home Depot also certifies him for both outdoor and indoor use which means he can join the party inside.

Home Depot is making it easy for Oogie Boogie to be delivered to right to your doorstep in plenty of time before October 31. He is listed for $149.

This news also comes after the Disneyland Resort decided to cancel its extra-ticketed Halloween party, the Oogie Boogie Bash, at Disney California Adventure Park. Now, fans have the chance to throw an Oogie Boogie Bash of their own, even with just a lawn display dedicated to The Nightmare Before Christmas.

Oogie Boogie is not the only Halloweentown resident that can haunt your homes this Spooky Season. Home Depot is also selling two different Jack Skellington and an animatronic Sally.

Sally stands 70 inches tall, will blink and move when activated by sound or motion, and will even sing the song she sings in The Nightmare Before Christmas. You can add Sally to your haunted house for $199.

As for the Pumpkin King, Jack Skellington is available in two different inflatables. One features him by himself, 3.5 feet tall fitted with bright LED lights. He is listed for just $29.98.

The second version is a little taller, five feet in height, and features his red-nosed pet, Zero. They are listed for $69.98.

The Nightmare Before Christmas has become a cult classic among Disney and Halloween fans. Its beloved characters have come to symbolize a family-friendly Halloween that also gets people beginning the transition to the Christmas season. Oogie Boogie, Jack, Sally, and the other characters have also earned a special place in the hearts of Disneyland Guests as each fall they move into the Haunted Mansion to transform it into Haunted Mansion Holiday.

Are you a fan of The Nightmare Before Christmas? Are you thinking about adding these inflatables to your Halloween display? Let us know in the comments!

Comments Off on Add Oogie Boogie, Jack, and Sally to Your Halloween Display