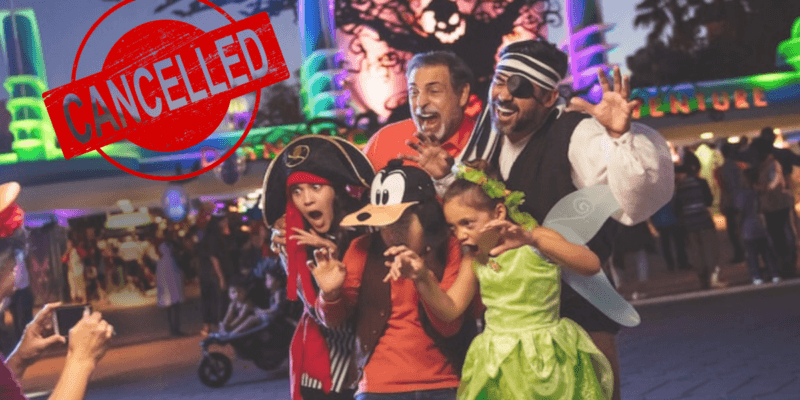 Disneyland officials have announced that the extra-ticked Halloween event in Disney California Adventure Park, the Oogie Boogie Bash, has been canceled this year, making it the latest of several special events to be canceled at Disney parks.

This news comes from the Orange County Register, which states that Disneyland officials are still waiting to receive theme park guidelines from the state. Disney has stated that they will share the Halloween plans for Disneyland Resort sometime in the future.

Tickets had not yet gone on sale for Oogie Boogie Bash before it was announced that the event was canceled.

This is not the first event to be canceled due to Disneyland’s ongoing closure. The resort already had to cancel its graduation celebrations, Disneyland Resort Grad Nite 2020, explaining:

In light of recommendations by school and government officials to limit gatherings for the remainder of the academic year in response to COVID-19, we are making the difficult decision to cancel Disneyland Resort Grad Nite 2020. Please visit the Disney Youth Programs website for more information.

Guests who had bought tickets for Mickey’s Not-So-Scary were issued refunds.

Both Mickey’s Not-So-Scary Halloween party and Disneyland’s Oogie Boogie Bash usually run on select nights in September and October, and both events are expected to return in 2021.

Disneyland officials also added that details on Disneyland and Disney California Adventure’s usual Halloween Time decorations will be shared at a later time as the resort continues to toward reopening with guidance from state and federal authorities.

The Disneyland Resort’s theme parks and resort hotels remain closed until further notice. Only its shopping and dining center, the Downtown Disney District has reopened to Guests.

What do you think about Disneyland’s decision? Were you planning on going to the Oogie Boogie Bash this year? Let us know in the comments!