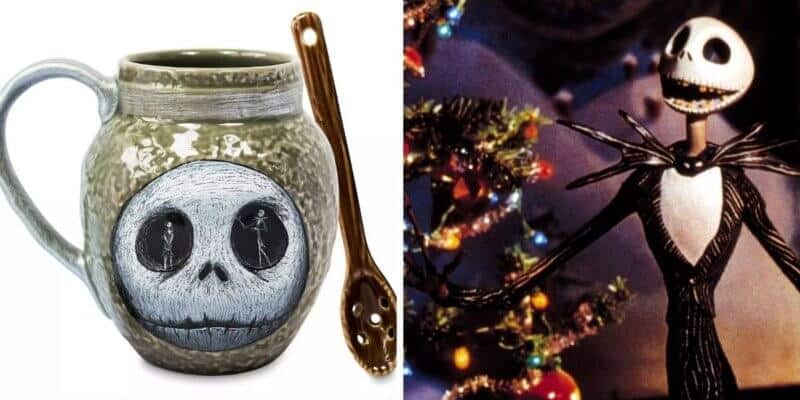 Disney is gearing up for the spooky season as they are starting to debut brand new Halloween inspired merchandise. One of the most popular Disney films that is showcased on Halloween merchandise is the beloved Nightmare Before Christmas.

Jack and Sally are fan favorites and tend to inspire several different pieces of merchandise each and every year. This year, the duo is seen on an adorable Nightmare Before Christmas coffee mug and spoon set.

Let’s take a closer look at the incredible details of the new coffee mug.

The front of the mug showcases Jack Skellington’s face, but if you look closely, within Jack’s eyes you will spot both Jack and Sally gazing at each other. (How cute!)

The backside of the coffee mug reads “Deadly Night Shade”.

In the unlikely event Dr. Finkelstein is preparing your brew of ”Deadly Night Shade” it’s good to be prepared. This frightfully fun mug and spoon set is inspired by the memorable scene in Tim Burton’s The Nightmare Before Christmas where Sally pretends to sip the doctor’s deadly concoction.

You can purchase this Nightmare Before Christmas mug and spoon set on shopDisney.com for $19.99 here.

More on Nightmare Before Christmas

The film follows the misadventures of Jack Skellington, Halloweentown’s beloved pumpkin king, who has become bored with the same annual routine of frightening people in the “real world.” When Jack accidentally stumbles on Christmastown, all bright colors and warm spirits, he gets a new lease on life — he plots to bring Christmas under his control by kidnapping Santa Claus and taking over the role. But Jack soon discovers even the best-laid plans of mice and skeleton men can go seriously awry.

Nightmare Before Christmas is streaming now on Disney+. If you are not yet signed up for the service, you can get started here.

Will you be purchasing this new Nightmare Before Christmas mug? Let us know in the comments below.