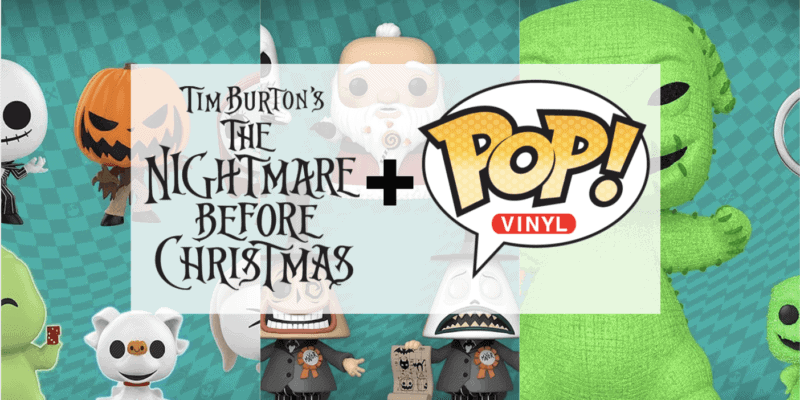 The Funkoween celebration continues with this brand new Nightmare Before Christmas Funko POP! collection that features all of your favorite characters from the Tim Burton film.

There will be a chase version of the Mayor with his sad face visible.

Next, we have a 10″ super-sized Jack Skellington Funko Pop. The Pumpkin King’s dog, Zero, is included, ready for a game of fetch! The set can be preordered at Hot Topic for $39.90.

Also available will be a standard-sized glow-in-the-dark variant of last year’s super popular Vampire Jack pop. This year’s Vampire Jack Skellington will be a Walgreen’s exclusive.

The next Funko POP in this new Nightmare Halloween series will definitely be making it into my personal collection! It features Oogie Boogie with his roulette wheel, ready to roll the dice.

This super cool version of the Nightmare Before Christmv5as villain glows in the dark and will be available exclusively at BoxLunch. It can be preordered for $39.90.

Oogie Boogie fans will also love these two figures from the new Nightmare Before Christmas Funko POP! line. Both are new additions to the Funko Diamond Series. The first is standard sized figure that will be a Hot Topic exclusive (available for preorder for $12.50).

The second, a keyring featuring a smiling Diamond Oogie Boogie character will be exclusively at Hot Topic and Box Lunch stores.

Finally, the new Disney Funko series will include a set of six Mystery Minis! All of these are adorable additions to any Funko collection.

The new Nightmare Before Christmas Mystery Mini set will be sold exclusively at Walgreen’s. It features several previously released character figures, including a standard version of Jack Skellington, a Scarecrow Jack, Sally, Oogie Boogie (glow in the dark), Zero (glow in the dark), and bedtime Jack (flocked).

All of these new Disney Funko POP! vinyl figure products from Tim Burton’s The Nightmare Before Christmas are currently available for pre-order from their respective retailers.

Which Nightmare Before Christmas Halloween Funkos are you going to buy first?