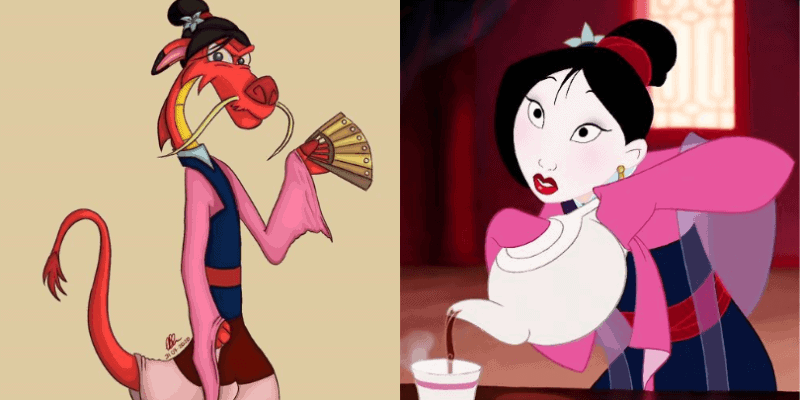 Disney has some of the most iconic sidekick characters in movie history. Mushu, Meeko, the Seven Dwarfs, Tinkerbell, Iago, Timon, Hei Hei — the list is endless. Artist HatterpillarArts clearly loves them all as they’ve re-imagined a few Disney sidekicks as lead characters in their movies with some adorable results.

Tangled is a fan-favorite Disney movie, with an iconic princess that rivals even the Little Mermaid and Snow White. Pascal is Rapunzel‘s adorable chameleon sidekick and he looks frankly adorable in his best friend’s dress, complete with her trusty frying pan!

The Chinese dragon Mushu is often the first Disney sidekick people think of thanks to the iconic performance by Eddie Murphy. He steals the film for many, and it also looks like he’s stolen an iconic Disney Princess‘s outfit! This amazing animated character doesn’t look pleased with the look. “Dishonor on you! Dishonor on your cow!”

Pua as Moana is heart-meltingly adorable

Though he’s more of a minor character in the film, Pua joined the ranks of favorite Disney characters for his cute face and loyalty to Moana. Disney fans will love seeing this sidekick dressed as of the most popular female Disney characters ever, and an inspiration to every little girl and boy across the globe. Though Hei Hei was a more major character, we guess Pua’s cute factor made him a better choice for this illustration!

I’ve always had a soft spot for this Disney sidekick, and this image just exemplifies everything great about him. He’s full of personality and has all the vibrant colors of the wind that make this underrated Disney animated film so great. I’m sure glad we got Meeko as the Princess‘s sidekick instead of Redfeather the Turkey, which was the studio’s original plan. Not sure he’d have rocked the outfit quite as well.

Check out all of HatterpillarArts’s work at their Instagram page.

Which of these Disney sidekicks as lead characters was your favorite? Let us know in the comments below.

Comments Off on Artist Reimagines Disney Sidekicks as Lead Characters