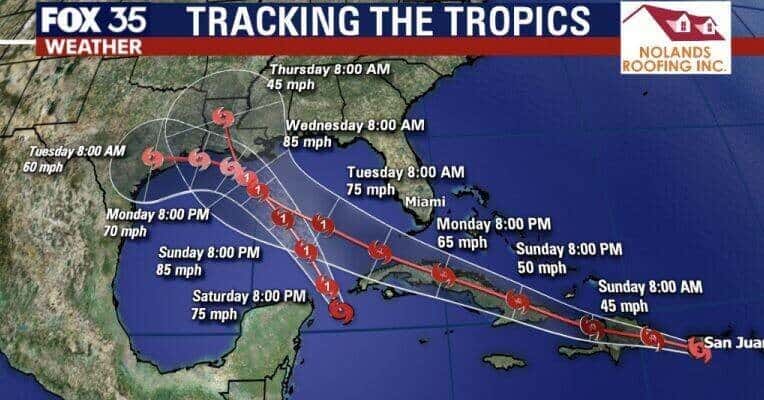 It is late August in the Caribbean, and the warm waters continue to be the perfect nursery for budding storms looking to blossom into a tropical storm or a hurricane.

12 storms have already appeared, and now Tropical Depression 13 was found. There is a chance it could make affect your upcoming Walt Disney World Resort vacation or Universal Orlando Resort Vacation, and we at Inside the Magic will continue to update you on this story as it develops.

While it is still a fair distance away, The Weather Channel projected on Thursday, August 20, that this storm to approach Florida as a Tropical Storm. They have since updated their prediction and “Tropical Depression 13” is expected to become a Category 1 hurricane–Hurricane Laura–by the time it arrives in Central Florida early next week.

On the morning of August 21, “Tropical Depression 13” officially became Tropical Storm Laura, and began tracking further and further west. Click here to jump to that update.

Just a few hours later, Tropical Storm Laura now appears to be moving even further west, taking Walt Disney World completely out of the cone of uncertainty for now. Click here to jump to that update.

As of 11:00 am EDT on August 22, Tropical Storm Laura continues to be tracking further west, taking not just the Walt Disney World Resort, but the entire Florida Peninsula out of the cone of uncertainty. Click here to jump to that update.

“Tropical Depression Thirteen is tracking through the Atlantic and could affect the Leeward Islands and Puerto Rico with rain and gusty winds by this weekend. This system might approach Florida and the Gulf of Mexico by early next week. However, its forecast intensity and track at that time are highly uncertain.”

If it continues to strengthen, it will evolve into Tropical Storm Laura. And if this track is correct, it was given a possibility of approaching Orlando and the rest of Central Florida in the early hours of Tuesday, August 25, with sustained winds of 70 miles per hour, just shy of the 74 mph minimum sustained winds needed to be classified as a Category 1 Hurricane.

The NOAA and National Weather Service also tracked a similar path with the center of its cone of uncertainty still in the Gulf of Mexico. Unlike Hurricane Isaias, this storm is expected to stay west of Florida’s center and move.

But since this article’s first publication, the Weather Channel is now projecting Tropical Depression 13 to breach that 74-mph-wind barrier to become Hurricane Laura, reaching sustained winds of 75mph by Tuesday, August 25.

BREAKING: Tropical Depression Thirteen is now forecast to become a hurricane. With The Bahamas and Florida in the cone, we're LIVE with everything you need to know to prepare. pic.twitter.com/QU2rHoK7Xn

The morning of Friday, August 21, brings both optimistic and concerning developments. They were concerning in that Tropical Depression 13 was now officially Tropical Storm Laura with sustained winds of 45 mph. The optimistic news for those of you planning Disney trips next week is that Laura appeared to be moving further and further west with the Walt Disney World Resort almost outside of the cone of uncertainty.

BREAKING: Tropical Storm #Laura has been named, with wind speeds of 45 mph. We're bringing you the latest LIVE on The Weather Channel. pic.twitter.com/7rT8dgz9tM

Tropical Storm Laura appears to be moving even further west with the Walt Disney World resort and the rest of Central Florida completely out of the cone of uncertainty.

How unusual are two tropical cyclone landfalls in the U.S. at the same time: https://t.co/MS6waqWAvs pic.twitter.com/7NO3W3Vl2b

None of the Weather Channel’s spaghetti models have it going near Walt Disney World either at this point.

Here's why and what it could mean for #Florida and the Gulf Coast. https://t.co/7NqRomcTyc pic.twitter.com/OkCPoRrC0I

Tropical Storm Laura’s course has moved further and further west taking Central Florida completely out of the cone of uncertainty. This should give a sigh of relief to those would-be Disney World Guests.

GAINING STRENGTH: Tropical Storm Marco has strengthened rapidly and is now forecast to become a hurricane on Saturday, according to the National Hurricane Center. Meanwhile, Tropical Storm Laura is bringing heavy rain to Puerto Rico. https://t.co/I9v1DJlzlK

Again, please keep in mind that storms can be unpredictable. And as it moves over Puerto Rico and Cuba, Tropical Storm Laura could still affect Florida and your Disney World trip.

We at Inside the Magic strive to keep our readers up-to-date on anything that could affect your upcoming plans. Including Tropical Storms.

If you do find yourself stuck at Disney World when a tropical storm or hurricane does come along, have the peace of mind knowing that you are in one of the safest places to be in the entire state of Florida.

Read More: Why you Want to be at a Disney Resort Hotel During a Hurricane

But whenever hurricane season looks to interfere with your Walt Disney World vacation, it helps to have experts advice regarding your options. That is why we recommend our friends at Academy Travel. They ensure you are aware of all of your options to help you pull off the most magical Disney World Vacation possible. Click here to learn more and receive your free, no-obligation quote today.