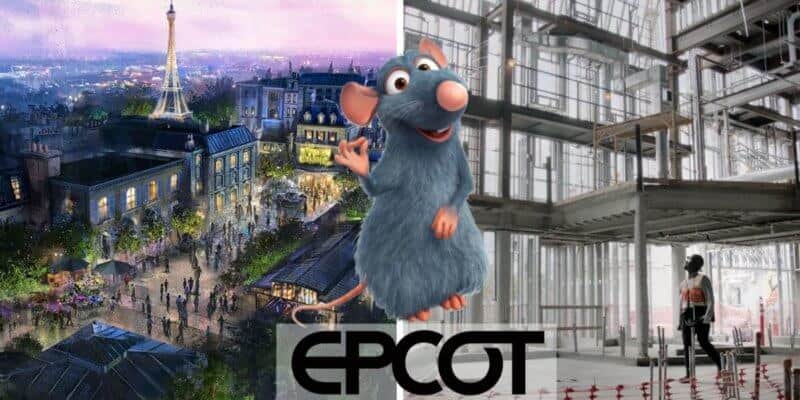 Remy’s Ratatouille Adventure is going to be EPCOT’s latest attraction in the France pavilion in World Showcase and will be filled with lots of family fun! It will be a trackless 4D dark ride attraction, which is based on the 2007 Disney Pixar animated film, Ratatouille.

The new Ratatouille ride is set to shrink down riders to the size of a rat. Riders will then have to scurry along with Chef Remy through Gusteau’s Restaurant in adorable rat-shaped ride vehicles. Disney riders can expect to see a variety of characters from the Disney Pixar film, including Chef Remy of course, along with the sounds, sights and smells of the restaurant. There will be special water and heat effects included in the ride.

And now, thanks to the latest episode of One Day at Disney on Disney+, we now have more details around the upcoming EPCOT attraction.

Mike Davie is the spotlight for the latest episode of One Day at Disney who is an Imagineering Project Manager for Walt Disney Imagineering. Within the episode, Davie gives us an inside look at the exterior facade for the entry to the upcoming Ratatouille attraction.

“So what you’re seeing here is the form is starting to take shape for the exterior facade for the entry into the Ratatouille attraction,” Davie said.

“The Ratatouille attraction and why it’s special to me is that we are bringing something special to EPCOT in the World Showcase pavilion that families can enjoy together,” Davie explained.

Later on in the episode, Davie takes us inside the attraction. “This theme park wall that you see here is actually blown up to rat scale so you’re a human and you’ve been shrunk to rat scale.”

“And you see this brick wall that’s all be hand-carved by our artisans. The challenges we’re doing is that you can’t get far enough away from it so you have to have some really talented artisans who are able to stand this close to it but still create something that’s the right scale as what it would be from the point of view from a rat,” Davie said.

If you want to watch the full episode of One Day at Disney, it is now streaming on Disney+. If you’re not yet signed up for the streaming service, you can get started here.

If you are looking for more information on EPCOT’s Remy’s Ratatouille Adventure, you can check out our full guide here.

Are you excited about the upcoming Remy’s Ratatouille Adventure attraction in EPCOT? Let us know in the comments below.