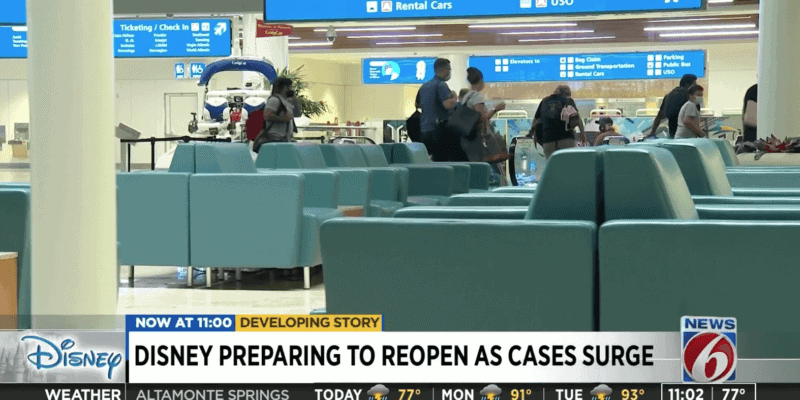 As Walt Disney World gears up for its phased reopening of the theme parks later this week and beginning next week, Orlando International Airport hopes it helps to bring in more travelers to the airport.

Airport leaders have stated that travel numbers are down at Orlando International Airport in Florida compared to last year. This is because travel overall is down due to the current global pandemic. However, with the phased reopening of Disney World beginning this Saturday, it could potentially help bring these numbers back up.

Monique Clark, a resident of Orlando, told Click Orlando that she plans to visit Walt Disney World, but she is very concerned about safety.

“I’m not so worried about things that will have to be done differently like face masks and social distancing,” she said. “That doesn’t bother me really. It’s just other people not following the rules that makes me nervous.”

However, there are other travelers who are going to wait a bit longer before visiting Disney World. Dustin Gehrig, who is from Missouri, said he won’t visit the theme parks quite yet. “Maybe when things calm down with the corona, I’ll give it another shot,” Gehrig said.

Keep in mind, if you plan on visiting Walt Disney World Resort, there will be safety protocols and several other changes put into place to keep guests and cast members safe. Social distancing measures will be put in place, excessive cleanliness, encouragement of mobile orders, plexiglass, and as we previously mentioned, the elimination of character meet and greets. Also being eliminated from the parks are parades and fireworks along with other similar entertainment that draws a crowd, and much more.

Do you plan on visiting Walt Disney World once they reopen? Will you be flying to Orlando International Airport? Let us know in the comments below.