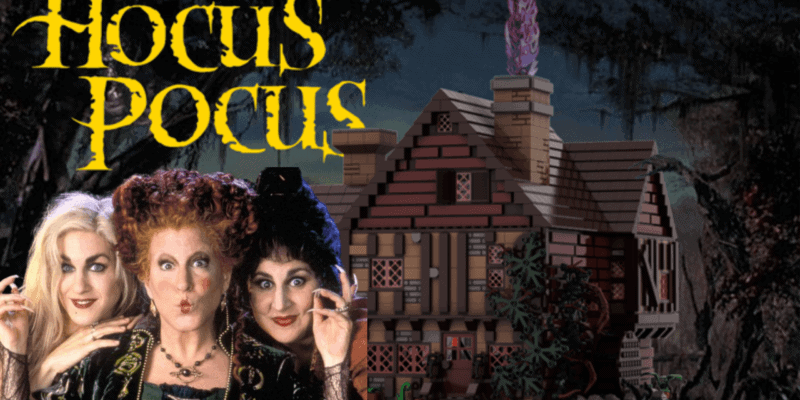 It’s crazy to think that it won’t be long until Hocus Pocus reaches its 30th birthday in 2023 and despite the movie doing relatively well in the box office, it captured many more people through the release of DVD sales and record-breaking showings during the Halloween season.

With a sequel now confirmed to be arriving onto Disney+ in the future, now is the perfect time for LEGO to release an official Hocus Pocus LEGO set.

At the moment the below LEGO Idea design just needs a few thousand more supporters for LEGO to take the release of the set seriously. Your vote could get it to the next level. Check out the Sanderson Sister cottage design below:

We absolutely love all the detail that user ‘TheAmbrinator’ has put into the design of this LEGO set. In his description he says:

This is the famous haunted house owned by the three witches in Salem; the Sanderson sisters. The lego-set is inspired by the movie Hocus Pocus. I absolutely loved this movie as a kid and never stopped loving it ever since! When I rewatched the movie this week and saw the Sanderson-house, a voice in my head said that this house would be an awesome Lego set not only for Hocus Pocus-fans, but for all people who like haunted houses and well…. just a bunch of hocus pocus! So why shouldn’t I give it a try? I hope you guys like the idea as much as I do!!

Related: Check out this fan-designed LEGO Tower of Terror set

If everyone reading this goes and votes for this project (you can do so here) then it stands a real chance of LEGO taking the idea and officially releasing the set. Given the partnership that LEGO and Disney has, it wouldn’t be out of the realms of possibility to see this set get an official release.

Do you like the look of this Hocus Pocus LEGO set? Let us know in the comments below!