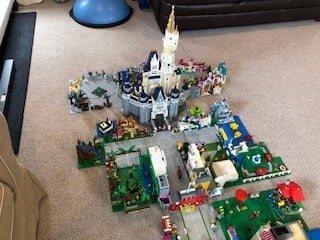 It’s safe to say that we all miss the Disney Parks when we can not be there in person. But nothing is stopping Disney fans from bringing the magic into their own homes!

One Inside the Magic reader, Owen Parker, decided to recreate the entire Walt Disney World Resort right in the comfort of his own house — Out of LEGOs!

This creation is like nothing we have ever seen before — It includes roads, all of the four lands as well as Star Wars: Galaxy’s Edge, all of the attractions, character meet and greets, flowers, and even a projection screen so he can show displays such has Happily Ever After!

Inside the Magic had the chance to speak with Owen to get more insight behind his creation. “During quarantine, I was looking for something fun to do and I realized how much I was missing my favorite Disney parks,” he stated. “I had recently cleaned out a huge room in my house and I had a bunch of LEGOs and free time so I said why not bring the parks to me!”

So where exactly did the inspiration come from? Well, Owen explains how he had looked back on some photos of his recent Disney World trip and that’s when the idea hit. “I looked at some inspiration from pictures and videos from my trip and I started construction,” he said. “I used the castle from the LEGO set of Cinderella Castle and I used Disney princess LEGO sets from my sister but the rest is completely from scratch and lego bricks.”

Owen continued, “I built the four main lands and included Star Wars land. I also use my projector to project shows onto the castle-like Happily Ever After. It’s so much fun to play around with ideas and build new things and the park is always under construction with new ideas!”

You can take a look at Owen’s full Walt Disney World LEGO creation in the images and videos below. We hope you enjoy!

What do you think of this Walt Disney World LEGO creation? Have you done anything like this? Let us know in the comments below.