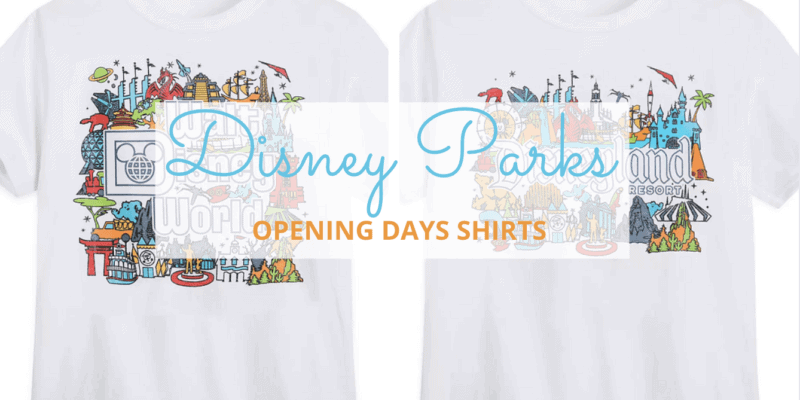 If you’re a Disney Parks fan, you won’t want to let these new shopDisney t-shirt pass you by.

Designed to look like retro concert tour shirts (we’re getting serious Tom Petty & the Heartbreakers vibes), these designs celebrate the opening days of iconic attractions at both Disneyland and Walt Disney World.

The front of the Disneyland Resort shirt features a variety of attractions and theme park icons, including Sleeping Beauty Castle, the Pixar-Pal-Around Ferris Wheel, the Matterhorn, and the Mark Twain Riverboat.

The front of the Walt Disney World ‘Opening Days’ shirt features some of the same Disney Parks icons as the Disneyland design, such as the Walt and Mickey Mouse Partners Statue.

It also has depictions of rides and attractions that are unique to the Florida Disney property, however. These include Spaceship Earth, the Twilight Zone Tower of Terror, and buildings from EPCOT’s World Showcase country pavilions.

The back of the Disney World shirt showcases the opening dates of many of the resort’s most popular rides, like Cinderella Castle on October 1, 1971, Pirates of the Caribbean on December 15, 1973, Splash Mountain on July 17, 1992, and Millennium Falcon: Smuggler’s Run at Star Wars: Galaxy’s Edge on August 29, 2019.

You can order your Disneyland Opening Days t-shirt here for $24.99. Sizing is men’s (unisex) in S-XXL.

You can order your Disney World Opening Days t-shirt here for $24.99. Sizing is men’s (unisex) and only size S is currently available.

Which Disney ride opening days shirt are you going to add to your t-shirt collection?